The Black Brigade of Cincinnati

While many know of the famed US 54th Massachusetts Infantry Regiment, one of the first all Black-American Infantry Regiments raised to fight in The American Civil War of 1861, few know of another similar Military Formation. The were formed a full years before The 54th, in The City of Cincinnati, Ohio and were known as The ''Black Brigade''. Their creation was born out of the need to protect The City itself. Much of Ohio was in danger from Confederate Raiders (who had begun to deep infiltrate The North. Many of Ohio's ''Sons'' had ''answered The Call'' and joined The Union Army in 1861 (leaving very few Militias and Home Guards for protection). The Brigade was raised to protect The City of Cincinnati. Over 700 Men were recruited (Commanded by White Officers as was the norm of The Day).

Although Ohio was an Abolitionist Region, many Whites did not agree with their philosophy. Often, violent riots erupted in Cities, targeting Black Neighborhoods. Arson and Lynchings were common place. Police and Militia were kept ''quite busy''. It was no simple feat to even recruit and raise an All-Black Regiment (with many Black not wanting to serve). In early 1862, the very real threat of a Confederate Invasion loomed. Southern Forces, victorious in Operations in Northern Kentucky – planned to advance into South Ohio. An Army was assembled in Richmond, Kentucky – a mere 100 miles from Cincinnati. Fear took The City. The Black Brigade was used to built Fortifications on the outskirts of Cincinnati. Likewise, they manned these Forts and provided active Patrols of The Countryside.

The ''expected'' Confederate Invasion never came, and The Black Brigade would never see active combat. By late September of 1862, The Brigade was disbanded. Many would travel East to join the Black Regiments being formed in Massachusetts, New York and New Jersey. These men would fight bravely to ensure the freedom of their Race. The Black Brigade, oddly, were denied Pension and not considered ''Veterans'' (perhaps due to their not being an Active Regiment of The Union Army – and seen as a Militia). In 2012, The US Congress passed Resolution correcting this injustice. A Memorial was also erected in Downtown Cincinnati, commemorating The Black Brigade's Defense of The City of Cincinnati in 1862. 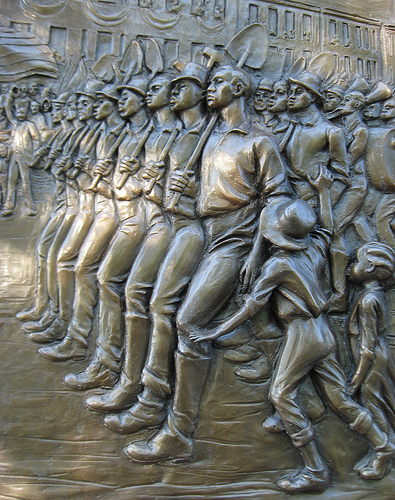