Formed in 1792, The Belgian Legion was an all volunteer Military Unit raised to support Napoleon during The Napoleonic Wars. The Legion, although Belgian was augmented by Austrian, Prussian and Netherlander Volunteers. The make-up of The Legion was (4) Regiments of Line Infantry, (1) Light Infantry, a Cavalry Regiment and an Artillery Brigade. The Legion fought throughout The Wars and was originally disbanded in 1815. Many of it's survivors chose to remain in France.

Later, with French involvement with Mexico in The Franco-Mexican Wars (also know as The ''Mexican Adventure''), The Legion was reformed and sent to fight. It participated in several important engagements, including The Battle and later later Siege of Pueblo (1863). The Legion was recalled in 1866 and disbanded. It was never reformed.

The uniform of The Legion during The Franco-Prussian War was that of the traditional French Colonial Army in pattern. They wore a White Uniform with the waist Sash (Blue) and a Blue Frock or Greatcoat. The Kepi (Cap) was the standard issue. For weapons, The Legion originally used the muzzle loading .60 Caliber Musket and switched to The Chassepot (Cartridge) Rifle, just prior to disbandment. A variety of pistols were used, as was the Sword and Saber.

The Legion was sworn to the honor of Empress Charlotte, then wife of Mexico Monarch Maximilian I. She was considered their benefactress. 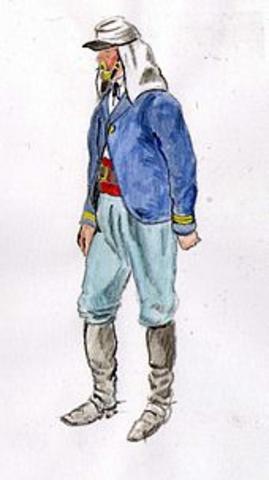