The Battle of The Little Big Horn

The native American Sioux Nation was at one time, the largest of all Northern Plains Tribes. They had resisted the encrouchments of Settlers and the resulting US Army (in their defense), for MANY years. The American Civil War provided some relief for “both” sides. However, with the War's end, hostilities were revisited. Many Veterans of the War (and their families), left the war-torn South and “headed West”. The Treaty of 1868 was drawn up between The US Government and The Sioux Nation. This Treaty stated that IF The Sioux Nation agreed to move (a final time) into the Northern most portion of the then Dakota Territory (and remained there), The US Government would leave them in peace. Further, they would “prosecute” and “White Settlers” who attempted to settle or hunt their lands. Resistant at first, The Sioux Chief demanded that their “sacred” Black Hills (mountains), be included. They were. Peace had come at last.

However, Gold was discovered in 1875 in The Black Hills (by Prospectors there illegally). A huge vein, word went out (as it had in 1849 in California). Hundreds of Prospectors and the resulting “debris” that accompanied them – poured into The Sioux Territories. Enough was enough. War was declared.
With so many Settlers coming under “the knife” of The Sioux, The US War Department tasked General Alfred Terry on June 10, 1876 to leave Kansas with a suitable “Military Expedition” to “compel” The Sioux back to their lands. Devising 3 Columns of mostly Cavalry (with some Infantry), Terry headed out. On June 21st, Terry sent 2 Columns – one under command of famed Civil War “hero” Lt.-Colonel George A. Custer – with orders to cross and hold a position across the Rosebud River in Dakota Territory. There, Custer and the other Column were to wait until the main body arrived (with Terry) on the 26th.

Upon Custer's arrival to the Region on the 24th with his 7th US Cavalry – he discovered a large trail of Indian “movement”. Rather than waiting (as was his orders), Custer followed the trail. His Scouts (mostly Cree Indians), found evidence of “a Large Camp”, with perhaps 1,800 Warriors. Marching at night, Custer moved his command closer to the supposed “camp”. On the 25th, Custer felt that his positions had been detected, and made one of the most controversial military decisions ever made. Custer “split” his Command into 3 section. Custer commanded 220 cavalrymen. He left subordinate Major Marcus Reno and 175 men behind him to secure a series of small ridges and depressions. The last Section was commanded by Captain Frederick Benteen (120 men). They were to “flank” (support) Reno's position. Another smaller detachment was assigned to guard the Columns “Pack Train” (Mules and wagons that carried provisions and materials). They were positioned farther to the rear of the Reno-Benteen positions (this Contingent numbered 136 men).

As Reno had sent Scouts out to his front, they were suddenly attacked by hundreds of Sioux Warriors. Forming a defensive line, Reno and his men “dung in” and began to defend themselves. Benteen soon faced a similar fate. Eventually they were able to “link up” and form a haphazard line of defense.
The the meantime, Custer and his 220 men had crested a hill and beheld the “outer lines” of The Sioux War Camp. Elated at the “element of surprise” - Custer soon realized that the “outer lines” were actually the center of The Nation. Suddenly Custer was assaulted from his rear and flank. He hurried sent word for his Pack Train to come forward with extra ammunition. The 7th Cavalry began a “fall back” movement. At every turn, hundreds upon hundreds of mounted Sioux Warriors attacked. Custer and his command were able to retrace their steps back over the hill. No cover was available, so Custer ordered his men to form a circular pattern (to cover all sides).

Close to 2,000 Warriors completely encircled Custer's 7th. After 15-minutes, the “battle” was over. Custer and all 220 men were dead. Reno and Benteen fared better. With the “pressure” being applied to Custer, their commands were able to retreat back through Sioux lines – only to met up with General Terry's command several days later. Terry and his now “reunited” Command arrived at The Little Big Horn (named for a small Creek nearby), and found what remained of Custer's command. The Sioux victory was short lived. Upon word finally reaching Washington DC of “Custer's Last Stand” (as it was called by the Newspapers of the day), President Grant unleashed the full fury of The US Army upon The Sioux. They would eventually be defeated and most Sioux resistance would end by 1880. 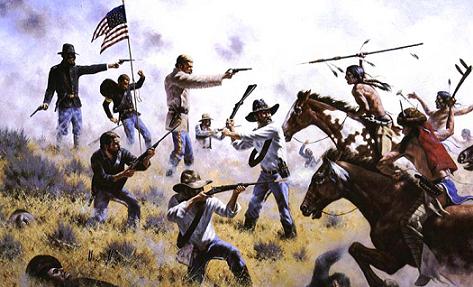