The Battle of The Crater

The infamous Battle of The Crater, was a portion of the larger Siege of Petersburg, Virginia  - which was a part of The American Civil War. Fought on June 30, 1864, it did not have the intended results of lifting the siege or giving Union General US Grant the vital City of Petersburg.

BACKGROUND:
The Petersburg-Richmond  Campaign was devised by newly appointed General in Chief of The Union Army – Ulysses Grant’s overall plan to capture The Confederate Capital of Richmond, Virginia. The capture of The Rebel Capital was forestalled by The City of Petersburg. A major Railhead, in which (4) railways merged – it was a major source of supply both into and out of Richmond for The Confederate Army of General Lee. A series of trench works, spanning some 30-miles east from Richmond to Petersburg were quickly manned and reinforced. Grant, who while was overall Commander – did not personally command The Union Army approaching Petersburg. That honor fell to the much beleaguered General Ambrose Burnside. Burnside had blundered several major battles which were meant to end The War with Lee’s surrender. He was given yet one more chance. His Army of roughly 125,000 attempted several times to take Petersburg. Failing, at best, The Union Army too threw up emplacements and fortifications opposite The Confederates (numbering 52,000). Both sides settled into “Trench Warfare”. Cannon, Mortar and the all-present and deadly Sniper – became part of “everyday life” for both sides. Petersburg had to be taken. It was the final piece of the Campaign that would cause Richmond to fall. Starting June 9, 1864 – it promised to be a truly “long” siege.

A PLAN:
Union Lt.-Colonel Henry Pleasants of the 48th Pennsylvania approached Burnside and Grant with a unique idea. Pleasants had been a Mining Engineer, with most of his Regiment having been ex-Pennsylvania Coal Miners. Using a “Medieval” tactic known as Under Mining, he proposed to dig a tunnel from Union Lines, through “No Man’s Land” – and finally some 20-feet under the main Confederate section of their trench defenses. At a predetermined time, the Mine (filled with Gunpowder), would be ignited. The resulting explosion would no doubt kill all defenders in that section and open a gap in their lines. Union assault Troops could then exploit the breach and (using the confusion), rush through and take The City. The Plan was wholeheartedly approved by Grant and Burnside on the 15th of June. Unfortunately, the two Generals lost interest in the Plan and saw it as a simple means of keeping the 48th "busy”.

THE MINE:
Using an ingenious method of ventilation known as “The Chimney Effect”, fresh air was drawn into the tunnel, with CO2 being withdrawn. The Mine tunnel was ultimately 511-feet in length, with a 75-foot galley way into which 8,000-pound of Gunpowder were placed. Tunnels were roughly 11-feet in height in some places. The Regiment worked almost round the clock to complete it.

PREPARATIONS:
After a last and futile attempt at taking Petersburg traditionally, Grant and Burnside re-embraced The Mine Plan. It was determined to ignite the explosives on June 30th with a specially trained all Black Regiment (USCT) selected and trained for the assault after the explosion. Some of these soldiers carried scaling ladders, for it was determined that a massive crater would be created. Troops would have to penetrate this obstacle and then climb the steep sides to get at a dazed and dying Enemy. However, at the last minute, General Grant pulled these soldiers. It was later (after The War) – that Grant admitted that it might look badly to use the Black Troops, with detractors to the recently recruited Black Soldiers, that The Government did not value them as highly as White Soldiers. Grant selected a relatively “Green” Unit of Infantry to make the initial assault. The Confederates meanwhile, had heard of the possibility of a tunnel. Most in Command did not believe it. Some however did, and took precautions in digging fresh emplacements behind what would become the Mine’s soon to appear Crater.

THE EXPLOSION:
After several abortive attempt to ignite the charges (the flame kept going out requiring constant re-splicing), the charge went off at 4:44 AM on June 30th 1864. The resulting fireball rose several hundred feet into the pre-dawn air. Smoke, dirt, broken pieces of emplacements and of course body parts – rained down for minutes. The Union assault Troops moved into the Crater – panicked and confused. They began to bunch up, unable to climb the soft clay and dirt. The Rebels, although dazed – rallied very quickly. The encircled the top of The Crater and began to literally shoot downwards into the growing “sea of Blue Uniforms”. One remarked later that it was “like shooting fish in a barrel”.

AFTERMATH:
The Battle of The Crater was a failure. Over 3,000 Men died in the attempt, with The Confederates losing over 1,000 only. The massive hole did nothing to remove The Rebels. The Siege would continue for another 8-months. The battle would though work to Grant’s eventual favor. He simply would go “around” The City – threatening Richmond nonetheless. Lee  would still have his supply lines cuts. Unable to maintain Petersburg and Richmond, both would fall. Lee would now begin his eventual retreat to the Southeast – and to Appomattox – and his surrender in 1865. 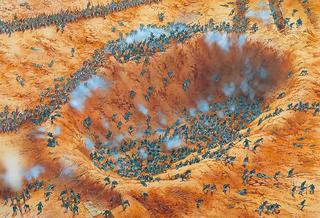