The Battle of Teutoburg Forest

In the annals of Military History exists a listing of some of the most epic and ill-fated Battles ever fought. The Battle of Teutoburg Forest in Lower Germany rightly deserves it’s place on said List. Fought in the year 9 AD, it pitted a vaunted and legendary Army against a resourceful and determined indigenous Peoples, also well known and equally determined to resist enslavement. The overly confident Legions of an Imperial Rome would soon meet The “Barbarian” Tribes of Germany in the thick and boggy lands of Teutoburg Forests.

BACKGROUND:
Imperial Rome had spent centuries expanding it’s Empire mostly unchecked, throughout The Ancient World. It’s goal of a “Pax Romana” seemed to be a near reality. That was until the 5th Century BC, when her Armies met The Germanic Tribes of the Far North of Europe. Hundreds of battles were stretched from the year 113 BC. Many Emperors tried in vain to subdue The Germanic Tribes they called “Barbarians”. Truce and Treaty was all that became the norm – without complete control over The Region. After a relative peace, Rome moved yet again to take a – by the 9th Century BC – rebellious Region and subjugate it. 7 Tribes stood in her way. United into a Tribal Confederacy and Commanded by a former Barbarian turned Roman Citizen named Arminius, a massive Germanic Army of close to 32,000 was raised to stop this latest incursion into their Territories. Rome had successfully destroyed those Tribes that had not joined the general rebellion. Rome’s 17th, 18th and 19th Legions were the forward deployed Armies tasked with engaging the “wayward” Tribal Confederacy. Commanded by Publius Quinctillis Varus, his men were largely untried and untested in both warfare and the particularly brutal style of The German Barbarians.

THE GERMANS:
As Chief of The Cherusci Tribe, Arminius was a “Hostage” of Rome (given by his Father after his Tribe had been “pacified”). Given a Roman Name, he and his brother Flavius spend their youth thoroughly indoctrinated into Rome’s Military Society. As such, Arminius learned well the “Roma  Way” of War. Attaining Citizenship, he was placed into The Equites Class (Wealthy) of Rome. He returned to Germania after his Father’s death to rule The Tribe. This was seen as good fortune to Rome, who – with a willing “Ally”, no needs were undertaking in fortifying The Germanic Frontiers. Unfortunately, harsh reprisals against other Tribes, caused a sense of Nationalism to rise in Arminius. He allied himself with other Tribes in resistance against Rome. He further undertook to meld both Roman Militaryship with the clever and often brutal battle tactics of The “Barbarian”. It is speculated that Arminius amassed over 32,000 battle tried and tested Warriors.

THE ROMANS:3 Roman Legions were placed under General Varius and tasked with bringing “to heel” the now in full rebellious Germanic Provinces. Installed by Emperor Augustus, his Legions were largely untested Soldiers. Most of his Officers had had some battle experience, but against The Germanic Tribes – there were none. Relying on sheer numbers and Roman “technology” to win, Varius and his Legions would march into unscouted and foreign Territory, using none of Rome’s previous skills in reconnoitering. Even the use of prudent marching formations were placed aside. The common thinking of Various was that The Germanic Tribes were not true Warriors and would no doubt run when he eventually marshalled his Forces into Formation. That was a tactical mistake from which Varius and his 36,000 Men would regret.

“HOMEFIELD ADVANTAGE”:
Arminius was well versed in another common requirement for any Military victory. One must “know” the field upon which one “fights”. He was well aware that Roman Soldiers were weighted down with heavy Armor and weapons. Further, even heavier siege equipment would find it difficult to traverse the “right” area. Arminius used his Scouts carefully. He had them use harassing tactics to “mill” The Romans into a funnel or Line Position. The dense Forests of Teutoburg lessened the incoming sunlight. In addition, recent rains had turned much of the ground to a slimy muck. Rome’s Solders were indeed weighed down and waterlogged.

THE BATTLE:
A 12-mile line of Roman Soldiers stretched through The Forest. Using the muddy terrain on one side (couple with trees) and a trench (pre-dug) on the other side of Rome’s line of march, Arminius threw up an earth wall or defensive fighting position. Waiting until The Roman Line was at the mid-way point, Arminius and his Forces struck from the “swampy side” of the road, forcing The Roman Soldiers into the opposite trench. From here, The Germans hurled spear and arrow upon the waterlogged and very much in shock Romans. A vain attempt to use Cavalry by Rome only furthered to bottleneck any escape. The Romans were forced into a circular defensive formation, assaulted upon by now – all sides. It is estimated that 20,000 Romans fell to Axe and Spear. Wet Bow sinews were rendered useless. Shields were waterlogged. Soldiers panicked. The three Legion Standards of The 17th, 18th and 19th were captured. This was a “feat” which had never happened before. They were never recovered.

THE AFTERMATH:
Rome had suffered the greatest defeat it had ever known at the hands of a “Barbarian” Culture. The incident had great effect on late Rome as a result. Other “Warrior” Provinces and Culture previously under the yoke of Rome now had a chance to effectively resist. This would cause more and more needs placed on Rome’s Military. The need for loyal and trained Soldiers were beginning to diminish. Rome had to relay more and more on her “Foreign” Auxileries to enforce her “will”. Many of these Units would become actively resistant as well. All of these factors would serve to further hasten Rome’s demise as the Cultural “Master of The Ancient World”.
As for General Varius, he was force to follow the Ritual of Suicide, completely broken in spirit by the loss of no less than 3 Legions AND their Standards. Rome never again used the numerical identifiers of the 17th, 18th and 19th Legions.
Arminius would become a legend to his People. Marrying a Tribal Princess, he ruled his Tribe without further Roman intervention. Most of his life after the Battle is lost to time. 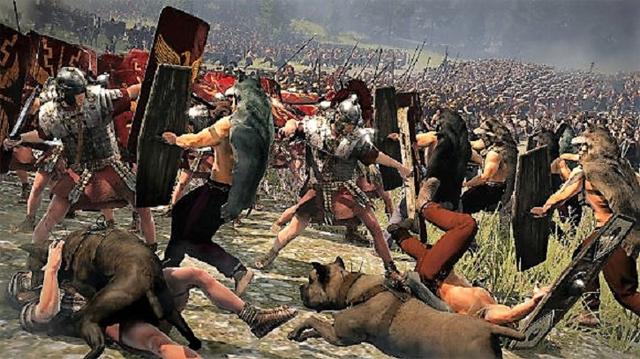