The Battle of Targoviste

Part of The Ottoman-Wallachian Wars, it is sometimes known as "The Night Attack". Occurring on June 17, 1462, it involved the forces of Vovoide Vlad III and the Ottoman forces of Mehmed II. Desiring outward expansion and acquisition  of northern territories, Mehmed II raised an army of 90,000 troops. Knowing the strength of his own army would not be enough to counter the Turks, Vlad III, requested aid from Hungarian King Matthias Corvinus. Perhaps Corvinus did not wish to war (at that time) with the Turks - because he sent no help. In all, Vlad III was able to raise an army of 20,000 to 30,000 men of all arms.

The Ottoman Turks attempted a landing of their forces at Vidin. Anticipating this, Vlad III positioned an army of archers nearby. They assailed the Ottomans attempting to land. The Ottomans, unable to land. Waited and  tried the next day. This time, the Ottoman's prized troops - the Janissaries and 120 cannon were able to make the landing and establish a beachhead. Turkish cannon rained down on Vlad III forces. They were forced to withdraw with Vlad III losing about 300 men.

As the Turks advanced through the region, everywhere they went they met with Vlad IIIs deprivations to their supply needs. He burned every bridge, or town or village - even diverted rivers and streams into flat lands to create marshes, all to slow the enemy advance. Vlad III even resorted to crude "biological warfare", by sending plague victims into areas held by the enemy. No port or river landing was safe from Vlad IIIs torches.

Vlad IIIs tactics were working. The Ottoman advance was slowing, coming to a halt outside of Bucharest. Encamped, they rested. It was at this time, Vlad struck. Amassing 7,000 cavalrymen, they struck when the Turks least expected them to. The dead of night. The Wallachian forces overran the Turkish camps. In fact, based on Vlad IIIs intelligence, he proceeded to what he thought was the personal tent of Sultan Mehemd II to kill him - and thus end the war. The Sultan was not there. The Ottomans were beginning to rally themselves. The Wallachian's made a hasty retreat with the loss of only 1,000 men.

It is unclear why the Turks did not immediately pursue. After several day, though, they did. Fanning out some 60 miles in all directions they found no Wallachian troops. But they did find evidence of Vlad IIIs distaste for them. Some 20,000 Turkish soldiers were found impaled on poles on every road the Ottoman forces took. Mehmed II had a name for Vlad III - Kazikli Bey, or "Impaler Lord". 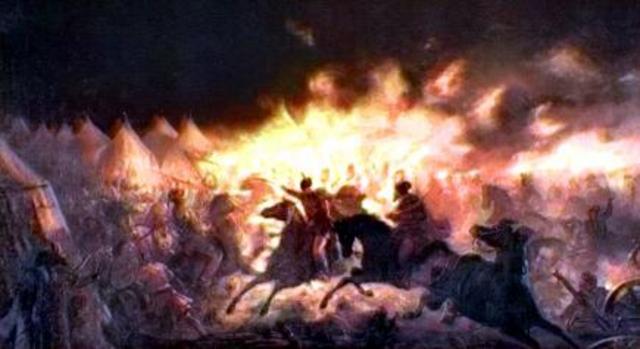