The Battle of Sulcoit Hill

Part of 3 battles that occurred in 968 A.D. - the main goal of the engagements was to remove the Norse/Viking influence and presence from Ireland. Famed Irish warrior Brian Boru and his modest sized army - engaged some 1,000 Norsemen. So as to the cause, it was aid that when Boru was a boy (and attending school) - a Viking Raid killed his father and many friends. This caused no loss of love between Boru and The Vikings. Boru's brother (now Chieftain), entered into a truce with the Norsemen King Ivar of Limerick. As part of the treaty, large holdings of land were given away (Vikings were farmers too). As Boru got older, he recruit like minded persons and began many small scale raids against the Norsemen. Not to be undone, the Vikings did the same against many of Boru's peoples.

At one point, so depleted of men - Boru was said to have a standing army of 15 men! Boru's brother (possibly older and wiser), felt that he had made a mistake with the treaty. He  sought to recruit more men fro his brother's forces. A small skirmish happened near Munster (which the Irish forces won). This also caused King Molloy of Desmond to think maybe he could also get rid of his Viking "problems" as well. Although the King may not have sent many troops, he no doubt sent money and arms. In early Spring 968 A.D. - Boru sent out a "bait" raiding party into Norsemen controlled Tipperary. The Vikings fell for this and gave pursuit. Following Boru's cavalry into dense woods near Soloheadbeg, they came upon Sulcoit Hill. Unknown to the Norsemen, Boru had a phalanx of men laying in wait. Immediately Boru's men formed a shield wall. The Viking ran up the hill and down into Boru's men. The Irish began to break up the Viking lines into smaller "portions". Upon doing this, they commenced to work with their Irish Axes. They slaughtered many.

Those who ran were found. Surrendering or not, they were killed. Without a Norse army to defend it (or King - Ivar was dead), Limerick was open to attack. Just hours after the debacle at Sulcoit Hill, Brian Boru's army maintained it's pursuit of the surviving Viking forces. Without 300 men, Boru entered Limerick and burned and looted every structure they came across. Any man found (old or not), capable of raising a sword was killed. Any child or woman was taken into slavery. Limerick was reduced to ash. This was a major defeat for Norse influence within the region (and would contribute to it's end within 5 years). 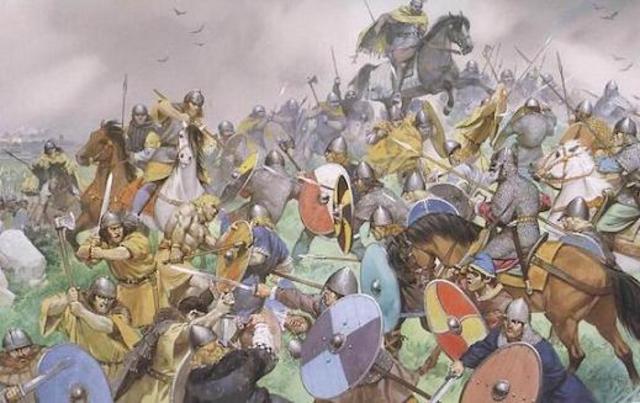