The Battle of Stirling Bridge

This heroic battle was part of The 1st Battle For Scottish Independence and was fought on  September 11, 1297. English forces under the Earl of Surrey, having scored a recent victory over the Scots at The Battle of Dunbar (the previous year) - felt that he was dealing with nothing more than a "rabble" makeshift army. With no real army or commanders (most of the noblemen/commanders had been previously captured at Dunbar), Surrey felt no alarm. With a force of some 9,000 men (7,000 infantry and 2,000 cavalry) - Surrey gave orders to his subordinate commander, Hugh de Cressingham, to engage the Scots. Cressingham and his army crossed the wooden bridge over the River Firth (outside Stirling). The Scots waiting were not the same "rabble" the English faced at Dunbar. Highly motivated and now under command of the resourceful William Wallace, the Scots waited patiently with an army of 6,300 for the English to completely cover the bridge. Suddenly, Scottish spearmen moved onto the southern entrance of the bridge - blocking any escape or retreat.

Heavy cavalry attacked the north entrance. The English could not move forward either. Wallace's troops destroyed the English army. Surrey was left with only a handful of archers and no way to effectively mount a counter-attack. He would have to return to England. Hugh de Cressingham's body was flayed to pieces. The parts were given away as trophies. The Battle of Stirling Bridge was a huge morale booster to the Scots. It was also an example of how a smaller infantry force could neutralize heavy cavalry - considered a "sacred commodity" in Medieval warfare at the time. 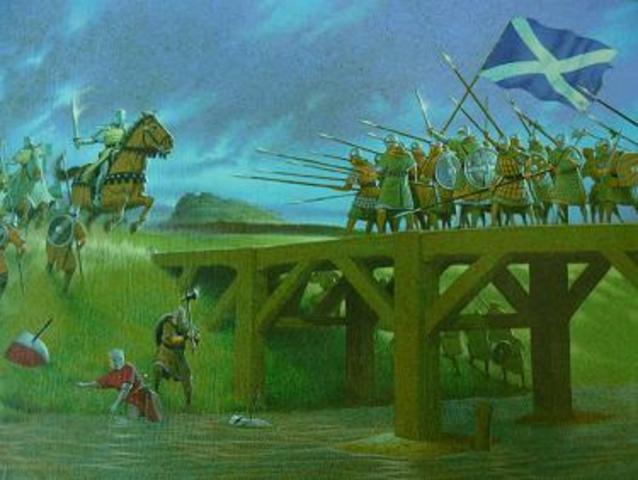