Fought on July 9, 1386, The Forces of The Swiss Confederacy, engaged the Armies of The Duke of Austria. The Swiss Confederacy had launched an expansion campaign on territories that Austria had intentions on. When their Swabian allies (feeling threatened and having the previous Treaty of Protection in place), called for their assistance, the Duke had no choice but to assemble a force of some 4,000. The Swiss (with a force of 1,400), began s series of smaller raids and skirmishes (all with the goal to avoid a major battle - until a time of their choosing). The Austrians were able to successfully keep the Swiss forces off guard with regards to future movements.

Initially staging what appeared to be a massive attack on Zurich - the Austrians planned to attack the smaller towns and cities further south. The Austrian plan was to initiate the tried and true tactic of "scorched earth" - and burnt crops and supplies sorely needed by the Swiss. The Austrians arrived at Sursee (near Lake Sempach) - which the Swiss were well aware and standing by. Entrenched within the city (in earthen fortifications), the Swiss could only stand by and watch and the Austrians burn the surrounding farmland (under orders not to attack). When the Austrians move on, the Swiss decided that now was the time - and pursued.

On the banks of Lake Sempach, the armies arrayed for battle. The Swiss deployed their cavalry along the slightly higher elevation of the lake (in a wooden area). The ground was not ideal for cavalry formations, so the Swiss dismounted and decided to fight as infantry. Of note, the Swiss cavalry were wearing a style of popular footwear known as The Poulaine (noted for elongated pointed leather toes). Unable to properly move, the Swiss cavalry all cut off the tips of their Poulaine's (piles of toe tips were found after the battle). The Swiss Knights formed in front of the cavalry.

The Austrians approached in one large line of deployment. Their plan was to encircle and entrap the Swiss. It is not quite known as to how the outnumbered Swiss beat the greatly superior forces of the Austrians. One "battle legend" states that as the lines clashed, a Swiss commander and his unit were able to open a small breach in the Austrian Pikemen. Seeing the breach, this commander (in an act of bravery), he himself into the pikes (killing himself instantly). This action so aroused the Swiss, that they all lunged forward - catching the Austrians off guard. The Swiss continued to push until the Austrians broke and retreated from the field.

Many Austrians Knights and commanders were either captured or killed. The Austrian attempts to curb the Swiss expansion plans were stalled. The Swiss took control of all acquired territories (and more) - as set forth by The Treaty of Peace signed by Austria and The Swiss in 1389. 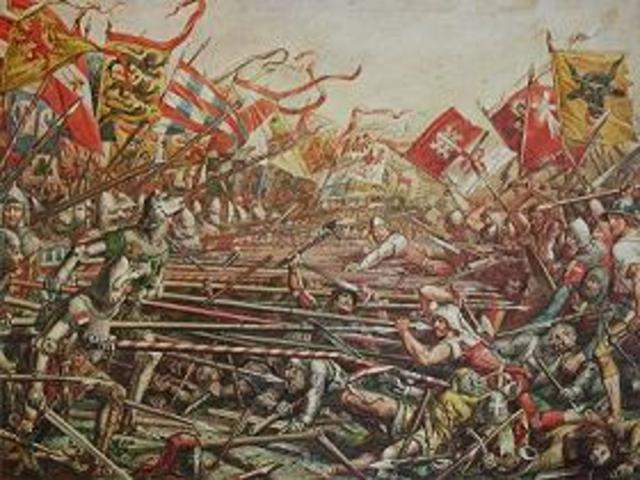