Located in Sarmin, Syria, this battle was fought on September 14, 1115 - between the Crusader forces of The Prince of Salerno (reinforced by Baldwin of Edessa) and the Seljuk Turkish forces of Sultan Bursuq. Due to a severe earthquake the previous year (November, 1114) - most Crusader forces were busy trying to repair and reinforce numerous castles and fortifications that had been damaged. With forces spread thin, this was a great opportunity for a Seljuk invasion. Since 1111, Bursuq had initiated a series of skirmishes and engagements, all in an attempt to rid the Crusaders from the region of Antioch. These attacks were largely ineffective (so much so that many local Muslim leaders formed an alliance with the Latins). The Prince of Salerno, (having heard from his new "allies" of a large Seljuk army moving towards him), assembled a 2,000 man army and marched out to meet them. They crossed the Orontes River and headed towards Aleppo.

Salerno sent word to Baldwin I (Jerusalem) to send additional forces. Baldwin activated an additional 4,000 men of all arms and sent them to Salerno. Before they could arrive however, the Seljuk army attacked the Crusader encampments. Holding their own, Salerno had warned his men not to break the defensive perimeter and give chase to the Seljuks. The Turks were constantly harassing the Crusaders to come and give battle. The discipline got so bad that Salerno stated that any man who broke line would have his eyes gouged out. To make his point, The Prince even rode through his lines sword drawn.

Seljuk scouts told Bursuq of the impending Crusader army coming from Jerusalem. Pulling his troops from the front of Salerno - he headed East. It was speculated that the Crusader army was now around 10,700 strong. Most of Salerno's Muslim allied continued the chase after the Seljuks (burning villages and towns in an attempt to get Bursuq to turn and fight). He did not. Feeling that the ""war" was over, Salerno's Muslim allies quit and went home! Salerno's scouts told him that the Seljuk forces had stopped and were encamping near Tell Danith (near Sarmin). The Prince ordered his army to immediately attack. As the Seljuks were setting up their tents - the Crusaders charged through.

Forming up into three divisions, the Princes army slashed into the Turks. At one point, the Seljuks had pressed Salerno's right, caving the Frankish positions in (even with the help of Turcopole Archers). At the last minutes, a squadron of mounted Knights rushed in and stabilized the lines. The Turks could not hold. They began a hasty retreat. Their casualties are unknown but it was speculated as being quite high (according to the Crusaders). Salerno had cemented his control over Antioch and it's surrounding regions (which he would enjoy for only another 4 years - his fate was to fall in battle). 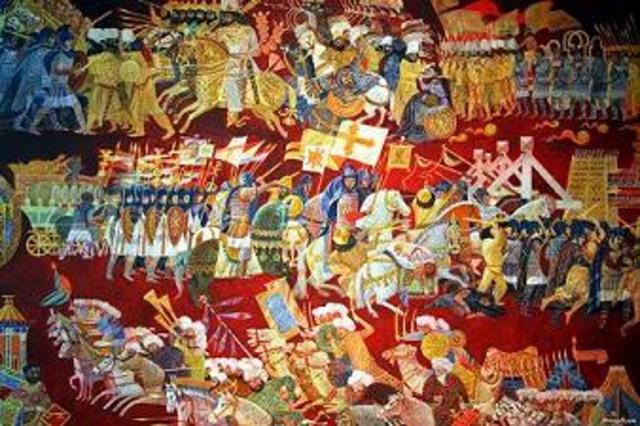