The Battle of Rourke's Drift

The small Lutheran Mission was tasked with the conversion of local Natives to Christianity. It was also the only free standing structure for miles! It also served as “home” to The 1st Battalion of The 24th Regiment of Foot. Placed as an “advance Guard”, many of the 140 British soldiers were sick. Bad food and the “standard” African “maladies” had place close to 50 of them at the Mission's “hospital”. Only a scant 100 could be counted as “fit for duty”. Commanded by Major Gonville Bromhead, not much happened in his “Camp”. A Royal Engineer assigned to the camp (Colonel John Marion Chard), had received “word” from “fleeing” Native Contingent Cavalry – that the entire 24th Regiment had been “wiped out” by a massive force of Zulu (and they were headed in the direction of Rourke's Drift).

Immediately, Sentries were posted in the nearby foothills. The “camp” was “fortified” as best as could be imaged. Breaks between the 5 or so smaller “out buildings” were reinforced by sandbags (called “Mealies”. Empty wagons were upturned and linked together to form defensive walls. An accounting of men and ammunition was made. They now simply waited. The Zulu's (fresh from their victory at Isandlwana just hours before), decided to split their forces. Several Impi (numbering 4,000) were sent to Rourke's Drift, with the other remaining Forces heading West. Those going towards Rourke's Drift were equally pleased with themselves. They had “possession” of many rifles taken from the fallen British soldiers.

One can imagine what 4,000 Warriors looked like as they crested the foothills overlooking Rourke's Drift. Still, the “Garrison” had to stand. Colonel Chard sent mounted Native riders towards Lord Chelmsford positions in the South (towards Cape Colony). Reinforcement WOULD be needed. The Zulu's no doubt thought it strange that so few British soldiers would even stand against them. The first “wave” began their assault. The Garrison fired volley after volley into them. The Zulu stopped short of breaching the outer walls and sandbags.

Undeterred, a larger wave started it's assault next. This time they were able to breach the wall and penetrated well into the Mission. Hand to hand combat was the order. British bayonets versus Zulu Assegai and Iklwa Spears. Such a small number of British soldiers. Still, they held their own.
At this point in the battle, the Zulu (who had taken control of were British Sentries had posted), began to fire “down” into the Mission. Not used to the kick or capabilities of the Martini-Henry, very few casualties were inflicted.

The last “assault” of the day actually came at night. A wave of Zulu Warriors were able to once gain breach the walls of the Garrison. This time several buildings (including the Hospital), was set on fire and burned. The Garrison spent the dark night being “sniped” at from the hills and “probed” by Squads of Zulu. On the morning of January 23, 1879, it was a fair bet that every one of the 80-odd British survivors were going to die. If so, one final attempt to defend the Mission would be made. An odd tactic (possibly one that only an Engineering Officer would dream of) – involved the building of an elaborate Redoubt of sandbags. The remaining men were to form in 4 successive “levels” (one above the other). The defensive tactic chosen was continuous “Volley Fire” (or line after line of rifles discharged at timed intervals).

The Zulu were perplexed. They had already lost 350 brave Warriors with scores of wounded. How were these “invaders” defeating them? In a quick rush to judgment, the Zulu Commander massed 1,000 men and called for a “final” assault. The wave moved at top speed for the Garrison. True to form, the Zulu took the remaining sandbagged walls in stride, as they approached the center of the Mission main “courtyard”, they had another problem. The British “Redoubt” erupted in rifle fire. Expertly timed, the 4 “row” fired (point blank) into the Zulu.

The Warrior bodies began to pile up at the feet of the Defenders and their line faltered. After several minutes 500 dead Warriors covered the courtyard. Perhaps the Zulu Commander felt that too much time had been put into the endeavor. Perhaps he wanted to rejoin the rest of The Impi as they made a more “grand assault” as they had did at Isandlwana. We will never know. The Zulu Commander simply “stopped” fighting and withdrew his forces from Rourke's Drift. As quickly as they had come – they were gone.

Amazingly, only 18 British soldiers were killed and another 14 wounded in a battle that should have completely wiped them out. Had it not been for the quick thinking of a Royal Engineer Officer (and a seldom used tactic), they would have been. Britain's highest honor bestowed to her soldiers was developed after The Crimean War of the 1850s. Many won the “Victoria Cross” so commissioned by Queen Victoria of England – at the disaster known as “The Charge of The Light Brigade” at Balacava Heights. 11 were awarded to the Defenders of Rourke's Drift. 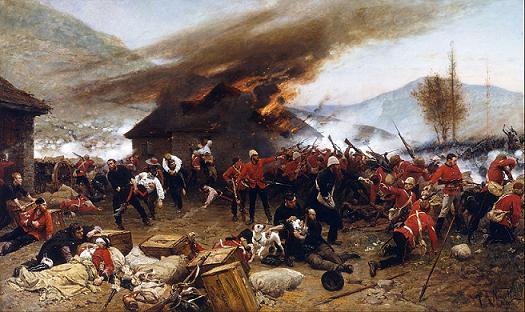