The Battle of Roncevaux Pass

Fought on August 15, 778, the Armies of Charlemagne engaged The Basque Vascones. Located in the Roncevaux Pass of the Pyrenees Mountain Range (between the borders of France and Spain). The armies were no doubt moderate in size, but exact numbers are no longer known. In particular, this battle has been romanticized over the centuries, due to the 11th Century poem "The Song of Roland" (which chronicled the battle and Charlemagne's primary commander/Knight - Roland). It is widely thought of as an early conflict between Christianity and the Muslim Faith.

When Charlemagne came to power, he began to expand the Frankish Kingdom. Taking over Aquitaine, Gascony and others - he established Fezenzac, Bordeaux and Toulouse. These expansions annoyed the Basques (who no doubt had territorial ideas of their own in these areas). Diplomats were dispatched to Charlemagne's Court in an attempt to establish ties. Knowing that the Basques were building an army to push the Franks back, many non-alligned Muslim Nations backed Charlemagne (over the Basques). Promising military assistance as part of the Treaty, Charlemagne saw an advantage to these alliances (especially in expanding his Empire in the long run).

Charlemagnes army headed through the Pyrenees Mountains heading for Spain in a two-pronged attack scheme against the Basques. Joined by a Neustrian Army, Charlemagne sent one force West - while another second force (under Roland) went East. Arriving in Spanish territory, Charlemagne was welcomed by the local populace (and provided with Muslim reinforcements). After several abortive attempts by to attack the Franks at Zaragova, the Basques withdrew.

Charlemagne thought that this "war" was over and began to head home. Near Navarra, the Basques attacked again. Feeling that he would lose more men in garrisoning the city, he opted to destroy it (much to the locals displeasure). Charlemagne's army left the ruins of Navarre and encamped at Roncevaux Pass. It was then that the Basques lived up to their name as fierce mountain fighters. Being armed with only several spears and a dagger (for each man) - and having no armor, the Basques cut and slashed at Charlemagne's rear guard and supply caravans. Being unfamiliar with the mountainous area (and being heavily armored), his troops did not fare well (even Roland fell in battle).

The Basques were able to inflict many casualties and made off with much of Charlemagne's caravans. Although a small foothold was established by the Franks in the region, after Charlemagne and his "beaten" army left, Zaragova would fall back into Basque hands. Two other attempts would be made by the Franks to control the region (812 and 824 A.D.). Both attempts would fail. The Basques would be able to establish themselves as an independent nation as a result of these actions. 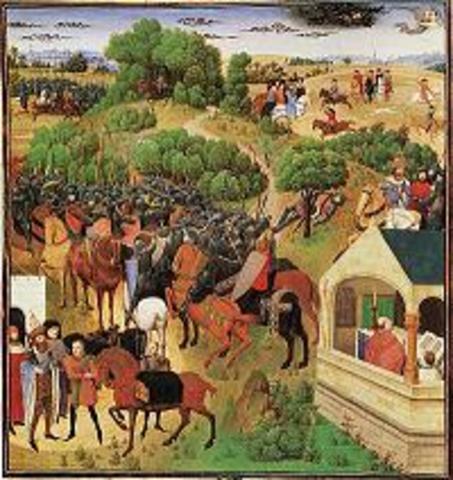