The Battle of Posada

This three day engagement was fought between The Kingdom of Hungary (with 30,000 men) against The Kingdom of Wallachia (with a force of 10,000) - from November 9 to November 12, 1330. Located near the border of Transylvania and Wallachia (now Romania). The battle resulted when the Hungarian Army invaded Wallachia and captured numerous fortifications. Despite negotiations to leave, the Wallachian Army (greatly outnumbered), rallied their forces and marched on them. Unable to stop the Hungarians from taking the City of Curtea de Arges, the Wallachians moved their army into the nearby mountainous region. The Hungarians left the City and gave chase.

The Wallachians (composed of infantry, archers and some cavalry), had to recruit the bulk of their "army" from peasants in nearby towns. These men had no training and little discipline. Hiding in the mountains, the peasant soldiers rolled down boulders and rocks on top of the advancing Hungarian Knights (with great effectiveness!). This tactic, as well as the use of Wallachian archers,  - would win the battle. This battle represented the immediate survival of The Wallachian Kingdom (and a period of intense hatred and small battles between the two Kingdoms). This would last until 1344, when a peace accord would be reached. Of note, the primary reason the Hungarians did not fully engage and destroy Wallachia, was their impending "war" with The Holy Roman Empire (1337). Facing an equal (if not superior military force), the Hungarians no doubt did not want a "second front"  on their doorstep. 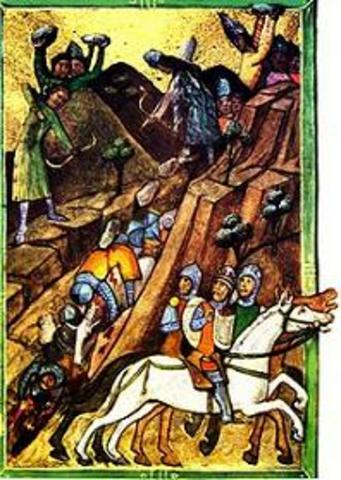