The Battle of Olustee

One of the “last” battles in the “Deep South”, The Battle of Olustee (FL), was fought on February 20, 1864. Florida was one of the last Chief suppliers of food and salt to the “dying” Confederacy. Salt was an important product in meat preservation and curing. Florida was a major supplier of BOTH commodities. The Union needed to arrest this situation soon. The Confederacy (Florida), had control of all ex-Federal Coastal Forts along it's Coast. However, a Union Force had landed upstream of The James River (near Jacksonville, Florida). This had circumnavigated the need to assault the imposing (and ancient ex-Spanish Fort, Castillo de San Marcos). Union Commander Gen. Quincy Gillmore had formed a Military Expedition in Union controlled South Carolina.

Taking advantage of President Lincoln and his Emancipation Proclamation – his command had been infused with many all-Black “Regular” Army Regiments. Gillmore assigned General Truman Seymour and 5,000 soldiers to advance through Northern Florida and “take” the Capitol (at Tallahassee). A reconstituted Regiment of the heroic 54th Massachusetts Infantry (of Fort Wagner fame) – took the lead. The Confederacy were well aware of The Union advance. However, most of it's defense troops were serving elsewhere. The few “Home Guard” Regiments of young boys and old men would do nothing to stop a 5,000 man advance. General PGT Beauregard assigned General Alfred Colquitt and a Force of 5,000 to advance from Southern Georgia and into Northern Florida. Their objective was to cut off The Federal advance to Tallahassee and defeat them – piecemeal.

Colquitt and his Forces (Infantry, Cavalry and Artillery) picked a “halfway point” outside the small hamlet of Olustee. On the outskirts (near a natural body of water called “Ocean's Pond”), they entrenched and waited. The thick Pines and even thicker Palmetto “bushes” served to do nothing but slow up Union General Seymour and his Forces as they were “probed” by Confederate Cavalry on the morning of February 20th. Forming his Infantry into a Line, they advanced straight into what Seymour thought was a clearing. What he “advanced” into was a withering fire of Confederate Artillery and musketry!

The valor of the “”untested” (except The 54th Massachusetts), United “Colored” Troops was exceptional. They remained in formation, firing volley after volley into the Rebel positions. Unfortunately, The Union Force was suffering from too many casualties and without reinforcements – they could not force the “issue”. Wounded himself, General Seymour ordered a retreat. Why the Confederate did NOT pursue The Federals is unknown. They suffered only 93 killed and slightly over 800 wounded – as opposed to The Union (who fared much worse with 200 killed and near 1,200 wounded). Based on the outcome of The Battle of Olustee, The North saw no further need in trying to “take” Florida “by force” (at any rate). The War was winding down (in favor of The Union). It would be a matter of time...... 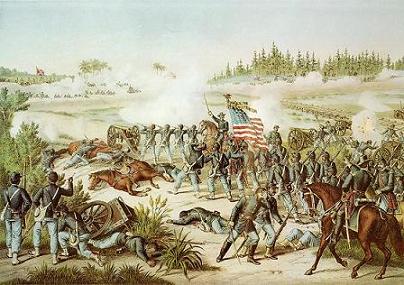