The Battle of Morlaix

Yet another engagement of The Hundred Years War, an English of upwards of 500 knights and Men at Arms - engaged French forces (mostly equal in number). Fought outside the French city of Morlaix on September 30, 1342, the English had previously besieged it. The English patrols in the region had advised of a contingent of French enroute. Moving out into the surrounding countryside, the English prepared defensive positions. Upon arrival the French attacked. Using their archers, the French poured volley after volley into the English. Moving positions so as to have a view of the English flanks - even more arrows flew. The English began to weaken and fall back. As such, the French cavalry began to advance upon them.

Those English knights who had been dismounted attempted to bolster the line and stop the retreat. The French cavalry proved too much. Regrouping some miles away, the English archers fired their own arrows into the advancing French (but they were running out of ammunition). With poor leadership and discipline abounding, several of the English commanders ordered their men to stop running and to slowly regroup - moving at normal pace, heading for the nearby dense forests. The French were confused and stalled their attack with this tactic. In a style that echoed the techniques of Charles Martel in the 9th Century, the English began to stop - fire and then slowly move off into the wooded area. The French hesitation gave the English time to entrench themselves in the woods. The French began to send in units, each being badly hit (so much so they each withdrew after their assault). Perhaps the French thought that additional English forces awaited them - for after several hours, they withdrew from the field. The English claimed a victory - based on an old trick! 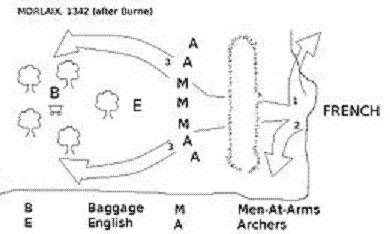