The Battle of Manzikert

The Battle of Manzikert was a major decisive victory for Turkish Forces against The Byzantine Empire. The results of which, would lead to their eventual conquest of Anatolia (and a major foothold in the Region for centuries). Fought in 1071, most of Anatolia was under Byzantine Rule. 100,000 Troops of The Seljuk Dynasty (Turkey) – and under command of Sultan Alp Arslan, had began to move into Anatolia. The Byzantium Emperor, Romanus IV amassed an Army of 60,000. He moved into Armenia (Turkey's Eastern Border). The small Town of Manzikert (now Malazgirt) was the location that Emperor Roamnus “divided” his Armies.

The first went into Manzikert, the second to Lake Van and the third garrisoned the Fortress at Akhlat. Unfortunately for Emperor Romanus, Sultan Arslan learned through spies of his Armies movements. He “force marched” his Forces into Manzikert. Realizing nhat he was greatly outnumbered , Romanus made a retreat for The Fortress at Akhlat. Enroute, his Armies clashed with an advanced guard of The Sultan's Army. Some of The Emperor's soldiers outright deserted or claimed “conversion” to Islam (to escape death). Even The Emperor's “trusted” Generals began to flee! It was a debacle. With his “back to The Sea”, Romanus himself commanded a remaining Army of less than 20,000. They fought “like Lions”, (repelling charge after charge) - but in the end – surrender was The Emperor's only option. Captured and eventually ransomed, The Emperor would die (ashamed and disgusted). 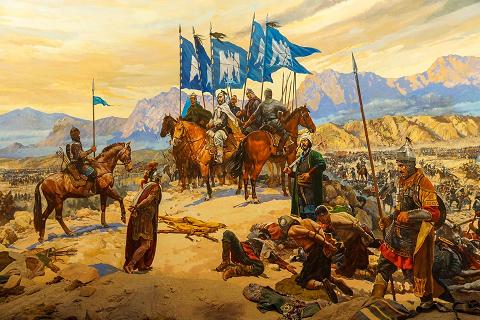