The Battle of Manassas

Called The Battle of Manassas (for the nearby hamlet of Manassas Junction, Virginia) by The North – and The Battle of Bull Run (for the nearby Bull Run River), by The South – this was the first time both Union and Confederates met in “Official” battle. Both sides, ill prepared and trained, were motivated by overzealous political and patriotic ideals. Clearly, both sides thought – The War would “be over within The Week”. Both were sadly wrong.

BACKGROUND:
The recently declared “Confederate States of America”, which comprised of 11-Southern States who, after many decades of perceived injustices, “left” The Union of The United States *first established in 1776). While causes and effects were many, the underlying reason was Slavery. The South had developed into a pure agricultural Society. Farming and cultivation of Textile crops such as Tobacco and of course, the all-time “King” was of Commerce – Cotton, ruled. Not only America, but most of Europe clamored for Cotton (which was the “fabric of existence”). Such labors were regulated by the use of African Slaves. Known as The “Peculiar Institution”, despite most Nations having abolished the often cruel practice of Slavery, it thrived in The American South. In The North, while agriculture too flourished, Industry was King. Great factories and a denser population base existed. Likewise, so too did The sentiment of anti-Slavery, or Abolition. For decades, both North and South had argued and threatened the continued existence of Slavery.  In the South, hardly a year went by went threats of Civil War rose it’s head. Despite compromise and concession, the Election in 1860 of Republican Candidate Abraham Lincoln (a Moderate on The Slave issue), it was perceived that he would eventually outlaw it’s practice. A provincial Government was established in December of 1860, made up of delegates from 5 Southern States. A Confederacy was declared and a President was chosen. Other States would follow. Immediately State and local Southern Militia were pressed into a proper Army. Federal Property and War Materials were confiscated. The pressure built up until April 12, 1861 – went Rebel Batteries surrounding Charleston Harbor in South Carolina, opened a 36-hour bombardment of Ft. Sumter. “Real” War was declared. The American War Between The States had begun in earnest.

“THE NORTH”
With a standing Army of only 16,000 Men of all Arms, US President Lincoln called for 75,000 Volunteers to put down The Rebellion. He got 100,000. Citizen Soldiers from City and Village, all heeded their Countries “Call”. However poorly trained and often led by “Politically” motivated Officer, prepared to make War against their fellow Countrymen.
To he sure, General Irwin McDowell was well aware of The Armies short comings. He cautioned more training, but Lincoln needed a quick and decisive victory. An Army of nearly 40,000 were prepared to march Southwest in Virginia and move onto Richmond  (recently declared The Rebel Capital).

“THE SOUTH”:
Just as patriotic and equally poorly trained, The Confederate Army was preparing as well. With most Southern States represented, it was Virginia who provided the most. Confederate President Jefferson Davis had chosen General Joseph Johnson and the dashing Pierre Beauregard to repel The Northern aggressors. Their Army was nearly equal to The North, with close to 40,000. Their task was to try and “turn” The Federal Right Line of Battle. They aligned through the woods and hills outside the sleepy Village of Manassas.

“SUCH A SPECTACLE”:
With an almost “Carnival” atmosphere, the wealthy and Elite of Washington – to include Foreign Diplomats, all tented carriages and wagons – each bringing Servants and “Picnic” lunches. All wanted to see the great “Event” of The Century. Crowding the narrow roads into Manassas, great Lines of “splendid looking” Blue coated Soldiers marched. Fancy Uniformed men, such as The French-styled “Zouave” Units and others marched and formed opposite The Rebel Lines. The Confederates too, were likewise arrayed. Although “Cadet Gray” had been chosen as the official color for The Rebel Army, many wore the old “Union Blue”, due to the lack of available Uniforms. The new Rebel National Colors, The “Stars and Bars” flew in contrast with The United States National Colors.

THE FIGHTING BEGINS:
Federal Artillery pounded The Rebel Lines, somewhat effectively. Answering in kind, the field filled up with so much Gun smoke, visibility was scarcely 20-yards. Formations on both sides advanced, fired and recovered. At first little ground was given by surer side. Resplendent Cavalry charged each other, conjuring an almost “Medieval” image of Knights tilting each other as Sword and Saber clashed. At midday, The Federal Artillery had begun to weaken The Confederate Center. Skittish Soldiers began to fall back under the withering Federal fire. All that is, save one Commander who was soon to go down in History….based on a nickname. General Thomas Jonathan Jackson was one-time Artillery Instructor at West Point and Infantry Tactics Teacher at The Virginia Military Institute. An intensely devout and religious man, Jackson would become a Master of Light Infantry Tactics, who is still studied today . On thus day however, he gave orders of encouragement to his Virginia “boys”. Standing unafraid as Shell and shot whizzed by, his Soldiers did not leave their positions. Nearby Colonel Barton Bee (North Carolina), looked up at the sight of Jackson. Historians still debate if Bee was giving a compliment or insult, when he cried to his faltering Men, “Look Men, there stands Jackson like a Stonewall. Let us rally around The Virginians!” The North Carolina Line did just that. The legend of “Stonewall” Jackson was born.

THE TIDE CHANGES:
Federal Forces, thinking that they had exploited a gap in The Confederate Lines afford by their Artillery, charged. They advanced into the full and furious Charge of Jackson's Men. The yelp of The Rebel Yell, that unmistakable Southern War Cry echoed through the thick smoke. The undisciplined Ranks of Union Soldiers began to run Rearwards. Dropping knapsack, Gun – just about anything they carried – all went onto the ground as the disorganized “retreat” became a full rout. Not all Soldiers ran, some maintained their firing disciplined and departed the field in good order. The roads back to Washington were choked with the panicked Spectators and equally frightened Union Soldiers. McDowell’s Soldiers had not only lost the field, but the battle. Lincoln was severely vexed and embarrassed. McDowell would be relieved of command and The Union Army would undergo a major reorganization. The South, rather than pressing the advantage of pursuit, stopped and took account of it’s Army’s casualties and remaining resources. Had they pressed their victory, nothing stood in the way of The Southern Army. Peace could have been dictated within day from The White House. Rebel President Jefferson Davis was equally not pleased. However his hopes were raised with this first Southern victory. Perhaps Europe would recognize the fledgling Country, as had their Grandfathers hoped (and achieved) – during The Revolutionary War.

CONCLUSION:
The War would not end in a Week, nor Month or Year. It would go on for 3 more long and bloody Years. The South was somewhat victorious in the early Years of The War. Such victories wore down the determination of The North. However, an effective Naval Blockade – coupled with Europe’s lack of official recognition would merge with the ultimate “weapon” of The War for The North – The Emancipation Proclamation, to bring victory to The North in 1865. Manassas was not forgotten. In 1862, scarcely a year later from the original battle, Armies would met again for a “second” Battle of Manassas. But Manassas is best known for a little known tale that clearly shows the irony of The Civil War. Henry Hull owned a modest Farm at Manassas that day in 1861. His lands were destroyed and his home badly damaged by both Armies. Although a Southerner, Hull wanted nothing to do with either Faction. Packing up his Family, Hull went farther East to the far away Hamlet of Appomattox, Virginia. He set up his Farm yet again. Life was good until that Morning in April of 1865, when Union Staff Officers of General US Grant knocked at Hull’s door. Would he be willing to let the Generals of two Great Armies meet to discuss ending The War? Hull allowed it, and Lee surrendered to Grant. Hull was remarked to have said in an interview many years later, that The War “started in my Front Yard, and ended in my Front Parlor”. 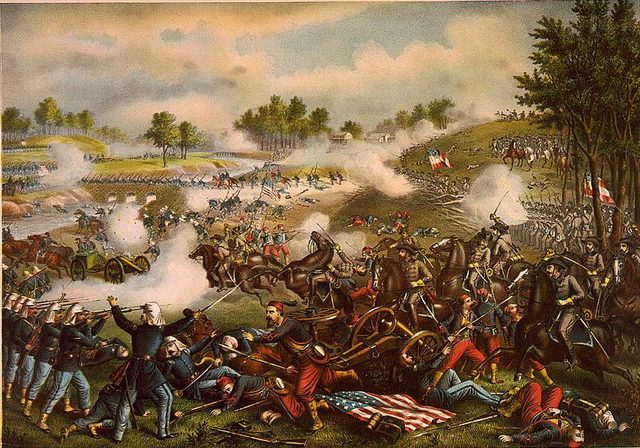