The Battle of Ma'arra

Occurring from November to December 1098, in Syria - this engagement was part of The First Crusades. The forces of Raymond of Toulouse and Bohemond of Taranto, after successfully laid siege to Antioch - set about to raid and subjugate the surrounding countryside. Having trouble maintaining their supply lines, the Crusaders need to stop the Fatmid raids plaguing them. Ma'arra - a very important city on the road to Damascus, was slated for the taking. A Crusader raiding party was sent in July, 1098. Sir Raymond Pilet, commanding the force - soon encountered a much superior Muslim force than his. Initially defeated, the Crusaders withdrew - concentrating their resources on smaller villages within the region. In November, 1098 - the Crusaders returned to Ma'arra, again intent on taking it. The main Muslim army was out of garrison and the remaining small force (as well as untrained citizens) saw not concern from the Europeans. Besides, they were not that effective the last time. They knew with the Winter season coming on, they would be low on supplies and not that interested. In the meantime, the Crusaders WERE interested. They were starving and low on other supplies. The Crusaders began the construction of a siege tower for the purposes of taking the city. A medium outer perimeter wall in front of an unfilled ditch was all they needed to circumvent. The Crusaders attacked. This time with their tower, they were able to take the walls of - and enter -  Ma'arra.

The remaining Muslim Militia brokered a true with regards to surrender. The Crusaders allowed them to leave. As soon as they were gone, the Crusaders fell upon the town. The raided and pillaged all they could find. The truth of the matter was that the city was important for it's strategic location NOT for it's wealth (it had none). Women and children were killed. If fact, per a report - the Crusaders resorted to cooking and eating the dead Muslim soldiers for food!  Although well documented (by the Muslims), the story could have been invented as a way of illustrating the barbarity of the Europeans and serve to galvanize the local populace against surrender or assisting them in any way. Although, stranger things have happened in war - especially involving starving soldiers! Wishing not to remain in Ma'arra, the Crusaders did not wait until Spring to march to Jerusalem. They razed the city and marched on. When the principle Muslim army returned, all they found were a few handful of survivors (with their tales), and a ruined Ma'arra. 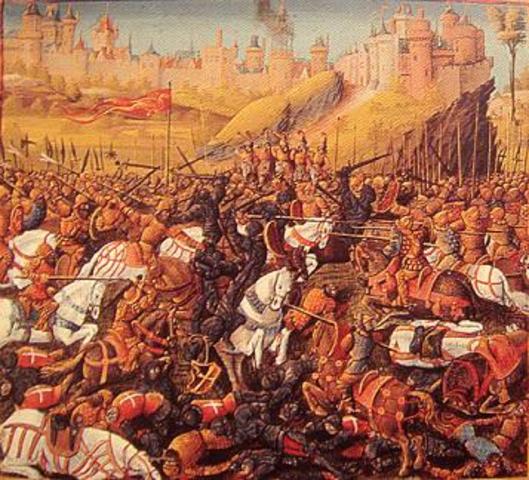