The Battle of La Mesa

Occurring on January 9, 1847 - The Battle of La Mesa was the last official engagement of The ''California Campaign'', which was part of the early phases of The US-Mexican War of 1846-1848. The American Forces, a composite of Soldiers, Marines and Naval Infantry, under Commodore Robert Stockton and Major General Stephen Kearny (numbering 650 Officers and Men) – were engaged by the Mexican Forces of Jose Flores (300 Lancers supported by several Cannon). The Mexican Forces, in a moderately defended position on the heights over The San Gabriel River, had (the day before), been routed by American Forces, at the previously discussed Battle of The Rio San Gabriel The primary goal of The American Forces was to march on to the (then) small City of Los Angeles – and capture it for The United States.

The American Forces had advanced from The River, North towards the vast empty plains called Regionally ''Mesas''. Moving in an Infantry Square, with Artillery in the center, The Americans were attacked by The Mexican Lancers (Califorenos), some 15-miles East of The City. The Mexicans charged The American left Flank, hoping for it to either turn or collapse. To their surprise, The US Forces remained steady, deploying in repeated Volley Fire techniques. Mexican Artillery (4) Guns – were too far away from The Americans to be effective. The Federal Forces however, made better use of theirs, firing over the charging Lancers and hitting their Reserve Formations.

Lack of coordinated communications and poor Leadership, caused The Lancers to simply break and run from the advancing American fire. Unable to re-group, the ''gap'' on The Mesa, gave The American Forces the ability to literally march into The City of Los Angeles several hours later. The US Flag was raised on January 11th and California was considered ''captured''. US Naval Warships in The Port of Los Angeles moved into Dock. The American casualties listed on 5 killed, but The Mexican numbers have always been disputed. It is estimated some 75 were killed with an unknown number wounded. 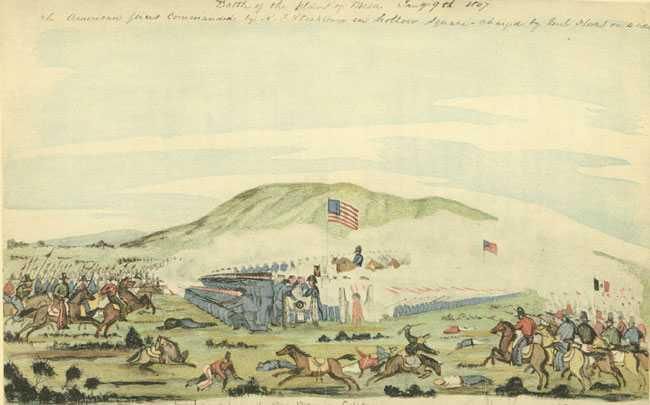