The Battle of La Forbie

Also known as The Battle of Haribiyah, it occurred on October 17-18, 1244. Part of the waning Sixth Crusades, the battle was known for being one in which many Military Orders were utilized as primary participants. The Knights Templar, The Knights Hospitallers, The Teutonic Order and The Order of St. Lazarus. The Ayyubid (Muslim) forces (composed mainly of Egyptians), were augmented by Khwarezmian mercenaries. Commanded by As-Salih - the engagement grew out of the capture of Jerusalem by Khwarezmian forces in August, 1244. Radicals for their time, the Khwarezmian's disliked the Crusaders as much as they did compliant Muslims who capitulated and made treaties with the Europeans. They formed their own "empire" with the goal of removing both factions from the land. Kurdish Emirs aligned themselves with former enemies (Crusaders), in an attempt to stop the Khwarezmian/Egyptian forces.

The forces of The Kingdom of Jerusalem (Acre), moved out to the small village of La Forbie (near Gaza). 2,000 cavalrymen rode from Damascas and arrived to reinforce the Crusaders. Now roughly around 7,000 strong - they waited for the Khwarezmian/Egyptian force of near 5,000. Upon their arrival, the Crusader Knights launched mounted charge after charge - all along the enemy lines. The Egyptians did not move. The next day (18th), the Ayyubid forces threw themselves against the allied Kurdish calavry from Damascas. Their lines shattered and the enemy began to move on to the next allied positions (Bedouin). They too were destroyed. Surviving members of the Damascan cavalry regrouped and fought valiantly. Unfortunately, too depleted to continue effectively, they withdrew - 280 survivors out of 1,000. With the enemy now on their flanks and to their front, the Crusader Orders charged.

The Banners of the different Orders flew in the hot desert air. They held on for several hours before their lines collapsed. Some 5,000 Knights fell and 800 taken prisoner. A large number of the different Orders commanders fell in battle. Infuriated by the disaster,  Pope Innocent IV called for a Seventh Crusade (obviously for revenge). However, due to the previous Crusades over the past decades, great numbers of men and armies could no longer be recruited (or retained). It took money (which many Kingdoms no longer wanted to invest solely "In The Name of God").  Although historians cite The Battle of Hattin and the multiple collapses of Jerusalem - The Battle of La Forbie firmly established the end of European control in The Holy Land. 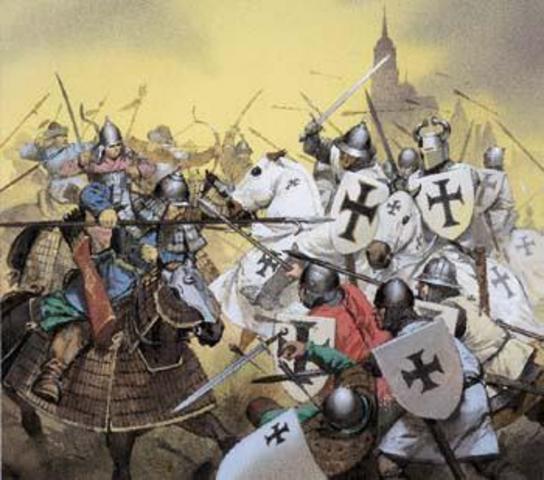