The Battle of Isandlwana

Fought on January 22, 1879, The Battle of Isandlwana is often cited as the worst defeat of a “Modern” Army at the “hands” of a Native Force in combat. After years of encrouchment into supposedly “Zulu Territory”, The British (seeking a firmer grasp Colonization of The Sub Continent) – the fierce and highly organized Warriors of Zulu Chief Cetshwayo (numbering 20,000), began to move against The British Expeditionary Forces (under command of Lt.-General Lord Chelmsford) – and numbering 15,000). Completely underestimating The Zulu threat, Lord Chelmsford “split” his forces into 3 Columns. One such, composing mostly of the 24th Regiment of Foot (South Wales Borderers) – around 1,900 men, crossed the Blood River and encamped at the foot of an impressive geological feature – Mt. Isandlwana. Chosen for it's broad and open field – the Column Commanders, Lt.-Colonel Henry Pulleine and Colonel Anthony Durnford, were not too nervous.

Lord Chelmsford had proved the 24th with several Artillery Sections as well as several of the “new” Gatling Repeating “Guns”. Finally, the 24th was provided with several Congreve Rocket-style Sections – for use. The Headquaters Command was established at the center of the Camp, with the well-known rows of white Shelter tents of the remainder of the soldiers of the 24th Regiment flanking them. Colonel Durnsford (2nd in Command), also oversaw several Cavalry Detachments of both Colonial British and Native (Bantu) Contingents. The “Queens Colors” flew over the encampment – (temporarily).

The required Skirmishers and Pickets (Sentries), were placed at distance from the camp at Isandlwana. As was procedure, rifle “limiting stakes” were placed at intervals (outward of 300 meters). These wood poles were marked so as to provide riflemen with a proper “ranging” of their weapons. The placement of Firing Stakes was not an uncommon task in camp (and was considered normal). No one in The British Camp obviously realized that advance Zulu Scouts (on the base of Isandlwana) had already reported their presence. The 20,000 man Impis (Regiments) – were 15-minutes away!

Several lone mounted British Native Contingents stumbled upon a lone Zulu Scout. Giving chase to the now “running” enemy, The Contingent crested one of the mountains foothill. They no doubt stopped in shock to see Zulu Impi after Impi advancing towards the British positions “en masse”. Turning, they galloped at full speed back to Camp (10-minutes) away to make their “hasty report”. Unbelieving the Scout's “accuracy” of their encounter, Lt.-Colonel Pulleine hesitated. Even several minutes may have helped. Colonel Durnsford was not so lax. Believing his Scouts, he ordered all his Cavalry detachments to advance towards the British Sentry Posts.

After 5-minutes of the initial report, Pulleine decided to sound “Stand To”. The heat of the day did not help the now tired and march weary soldiers – forced to “fall into ranks”. Many no doubt though it “a Drill”. The Contingent galloped towards the advance Picket positions. No doubt an alert Sgt.-Major may have seen the massive cloud of dust generated by the 20,000 odd Zulus. It is known that the Sentries deployed a few rockets at the advancing “Host”. The loss of 30 or 40 Warriors was but a “drop in a swirling Ocean”. Very quickly, the advance Sentries were swallowed up (stabbed and hacked to death). The Contingent fired round after round into the advancing Zulu. They too had to fall back to the main Camp.

No doubt by now, Col. Pulleine was well aware of his situation. He also no doubt gave commands for the Column to form up into Firing Lines. Some did. But the massive Zulu Army sweep through the Camp as “so many Ants”. Many of the soldiers formed smaller “self-defense” Squads, trying in vain to resist. Maybe Col. Pulleine did too, as several Zulu Warriors entered his Command tent and killed him and his Staff! Now Durnsford was aware that there was little to do. He ordered the “Queen's Colors” retired and given to a junior Officer (as legend states) – and ordered to be taken back to Lord Chelmsford for safety.

Then, suddenly (as if almost a sign from the Gods of The Zulu) – a total Solar eclipse began. Within minutes, the plains of Isandlwana were bathed in darkness. Only the screams of the dying British soldiers could be heard. In the end, the Zulu's lost only 1,000 Warriors (with another 2,000 wounded). The 24th suffered a lose of over 1,800 Officers and men. ALMOST the entire Column was decimated. Chief Cetshwayo have given orders to his field “Commanders” to kill ALL British soldiers they found. The Impis took their “traditional” war trophies from the dead British (namely rifles!). They turned their “wrath” next to the small, sun-baked Lutheran Field Mission named after an Irish Settler – Rourke's Drift. There were British soldiers there.............. 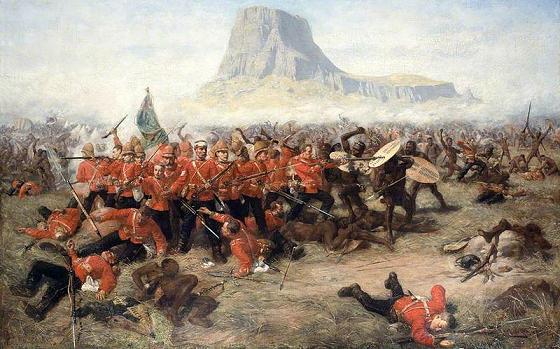