The Battle of Hopton Heath

The Battle of Hopton Heath was fought on March 19, 1643, as part of The English Civil War. Both Royalists and Parliamentarians claimed victory. The goal of The Parliamentarian Forces was to cut off various important Northern England Cities and supply points from Royalist control. They also moved to push Regional Royalist Forces into an ''open fight''.

Parliamentarian Forces under Sir John Gell and William Brereton – numbered 1,500 effectives (1,000 Infantry and 500 Cavalry). They also had (15) Artillery Guns of various poundage. The Royalists were under control of Earl of Northampton, Spencer Compton with 1,200 effectives. His numbers were largely 1,100 Cavalrymen and 100 Infantry. Compton too had Artillery (but the numbers are unclear).

Outside The Village of Hopton, Parliamentarian Forces entrenched. They erected quick earthen works on the field. They dispersed their Artillery to the Rear and Flank. On the morning of March 19th, Royalist Forces appeared. It is unclear of they were actively seeking them or had simply ''stumbled upon them''. Royalist Scouts reported ''no activity''.

The Royalists opened with their Artillery – with well placed results. The Parliamentarians began to waver. The Royalist Cavalry charged (superior in number), and smashed into Gell's Dragoons. They were pushed back. Just as quickly, The Dragoons regain their courage and re-grouped – charging forward wildly. The Parliamentarian cannon could not support them for fear of hitting their own.In a twist of fate, The Earl himself led The Royalist Cavalry personally. Unhorsed by The Dragoons, He was ordered at gunpoint to yield. He refused and was shot dead! The battle slowed to ''field diplomacy'' at this point. Royalist Forces wanted back the ''body'' of their Commander – The Earl. The Parliamentarian stated they would ''ransom'' it for captured cannon and arms. 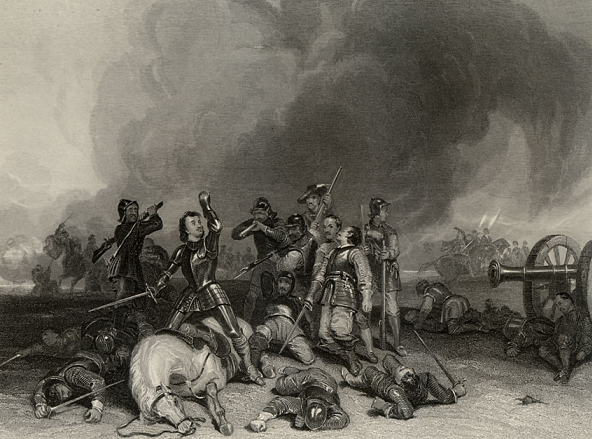