The Battle of Fontenoy

Britain, Hanover, Dutch and Austrian Troops – forming an Allied Army known as “The Pragmatic Army”, were set into play against France's so-called “claim” on The Austrian Throne. Unrecognized, this action would lead to The War of Austrian Succession. Allowing France to “expand” it's control beyond it's “small Kingdom” could not be allowed. Through successive battles and engagements, The Allied Armies had been more or less successful in blocking (or stopping French Forces). That was until May 11, 1745 – on the outskirts of the City of Fontenoy (present day Belgium). The French Army campaigning in the Region numbered 50,000 odd of Infantry, Cavalry and Artillery detachments. They were equally matched to The Allied Army of nearly 50,000 as well.

The “Pragmatic” Army was commanded by the illustrious Duke of Cumberland (son of England's King George II). The French Forces (under command of Marshall Saxe), had concerns. The Pragmatic Army was better armed and disciplined. It was doubted that a “front to front” encounter would go well with them. Controlling the fields East of The Scheldt River (near Fontenoy), Saxe erected Redoubts and emplaced his Artillery on the Hills overlooking such. The Allied Army was (at this point), was unclear as to the exact location of Saxe. They encountered smaller burnt Villages as they advanced. They no doubt though it was an Advance Guard. The British Cavalry was dispacthed to the Front of the advancing Allied Army. A withering barrage of cannon fire greeted them (and killed their Commanding Officer!) The French had been found.

Encamping on the outskirts of Fontenoy, The Allied Army formulated it's plan. It would Line up in several Line Columns and advance to the Front. On the morning of the 11th of May, The British marched out into the field. No sooner than they cleared the edge of The Barry Woods, they came under intense Artillery fire (from Saxe). The Advance Column faltered, unsure if a “frontal assault” would be useful at all. The Duke of Cumberland sent two additional Columns of Infantry to reinforce the now “bogged down” British advance. Again, the Line advanced.

No doubt The British by now could see the entirety of Saxe's Infantry arrayed on the plateau of Redoubts above them. Musket and cannon soon began to whistle down into their ranks (had they not!) The British (advancing underfire), stopped – dropped, and fired a volley. Up again, they would advance a little more and repeat the tactic (all under withering fire). No doubt The French were impressed. The British were NOT yielding. However, The French were not without their own means. A Regiment of French Dragoons attacked The British flanks (already ripped to pieces). Trying one last volley in an attempt to regroup and charge, this was a idea unrealized. Just as The British were preparing for an assault to breach the principle Redoubt, a Regiment of Irish Infantry (in the pay of France), charged. Too weak to resist, The British Lines withdrew from the field, leaving 7,500 dead and wounded on the field. There would be no revenge either. The Duke had received word of his and his Army being recalled back to England. The Jacobites were in revolt............again. 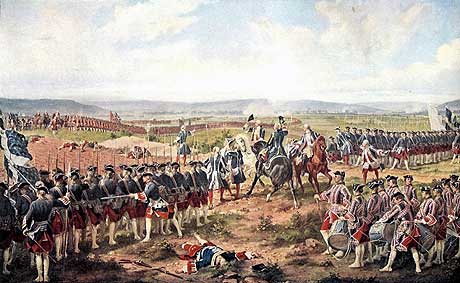