The Battle of Culloden

Fought on April 16, 1746, The Battle of Culloden was a last military attempt to restore The House of Stuart (Scotland), to the British Throne. “The Pretender”, Charles Stuart (nicknamed “Bonnie Prince Charlie”), was the grandson of James II (deposed in 1688) by his Son-in-Law William of Orange. James tried to regain the Throne from The “Hanoverian Dynasty” of England Royalty in rebellions led in 1715 and 1745. Both attempts failed. Britain was taxed by France during the ongoing War of Austrian Succession. After the debacle of Fontenoy (Belgium), England was now vulnerable to an invasion from France. Charles saw an opportunity and struck. Rallying supporters (known as Jacobites), a massive Army marched on to Edinburgh.

The Jacobite Army defeated the standing British Army at The Battle of Prestonpans. This left a corridor to advance the 6,000 man Amry of Jacobites into London! Making his way to Derbyshire, Charles and his Army halted and waited. They had been promised help from France in the form of a Naval Fleet. However, as they waited, an 4,000 man twin Royalist British Army advanced on their position. They would met at The battle of Falkirk (of which The Jacobite were victors!). The Jacobite Army marched to Inverness. Meanwhile a new Royalist Army (under command of The Duke of Cumberland -and Son of King George II), marched to Aberdeen. It spent a month and a half in training. Ready, it marched out to met The Jacobites near the Moors of Culloden. The British were well trained and armed. They also had the advantage of trained artillery. Numbering 7,000 men of all ranks, The Jacobite Army was around 8,000. Made of of Highlanders (with some Lower Clans), some French and Irish also made up their ranks. Flushed with their recent victories, they felt “Bonnie Prince Charlie” would soon sit his Throne in triumph.

A hard, sleeting rain fell that day at Culloden. It's direction was such that it hit the faces of The Jacobite Army (causing seeing the British an issue). Nonetheless, The Jacobite Line ran at full spedd into the well formed (and disciplined) British. Standing by with bayonets fixed – they waited until The Jacobite advance was 200 yards away, and opened a volley!. Those remaining Jacobites STILL continued their advance, swords raised high. These men fell under The British bayonets!

The remaining flank of The Jacobite Army (it's left), charged next. After a withering sortie of British musketry and cannon their charge began to falter as well. Seeing them slow, the command was given by The Duke of Cumberland to “charge”. The British line advanced on the now “retreating” and battered Jacobite Army. Those initial survivors were cut down by mounted British Dragoons. Unable to reform, Charlie saw his dreams of the Throne vanish within 5 months. He was able to escape the County and lived out his life in exile in France. The British only suffered 50 killed and 300 wounded at Culloden (due to their superior training and firepower). The Jacobites lost 2,000 killed and 400 captured. 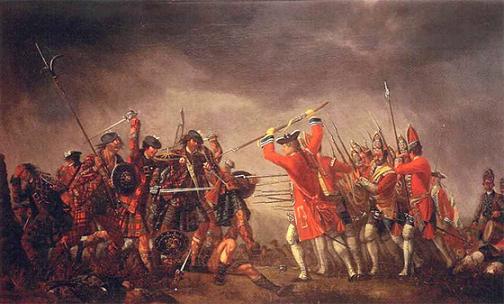