Fought on June 18, 1053 - in Southern Italy, a Norman army under Humphrey of Hauteville engaged a Swabian-Italian-Lombardy Army (commissioned by Pope Leo IX), and commanded by Gerald of Lorraine. Located near Foggia, Italy - this battle finally forced Papal recognition of the Norman Southern States in Italy ( establish by their 1017 invasion of the region). The Normans had roughly 3,000 cavalrymen and around 500 infantry. The combined Papal States Army had about 6,000 infantrymen and horse.

The Papal States Army began their move towards the City of Civiate to attempt to link up with a Byzantine assistance force. The Normans moved in to intercept them. Due to poor harvests, the Norman supply line was weak. Hungry and in need of supplies - when the Normans engaged The Papal Army, they initially attempted to surrender and ask for terms. This offer was refused.

The two armies were separated by a series of small hills. The Normans arranged their cavalry into three companies (flanking) and their infantry and archers in the center. The Papal Army were arranged into two positions - the cavalry was lined up in a thin line (running along the hill line). In their center were their infantry (but they were undisciplined).
The Normans began their attack by having their cavalry flank the Papal infantry. The infantry did not even try to resist the assault, many of them turning to run (and being cut down in the process). The Papal cavalry next drove down the hills and dismounted, attempting to support the collapsing infantry. Sword and axe, lance and arrow - The Normans cut down the Papal Knights. The clash was said to be horrible to behold (with men being cleaved of limb). The Papal Army, badly bloodied - had to withdraw from the field.

In the aftermath, the Normans would continue on to Civiate (not only taking it, but capturing Pope Leo!). This act forced him to finally recognize the Normal States. Unknown to the Normans, The Pope had begun to enter into secret deals with The Byzantines to raise an even larger army to again take on the Normans. This never happened due to the Pope's sudden death. 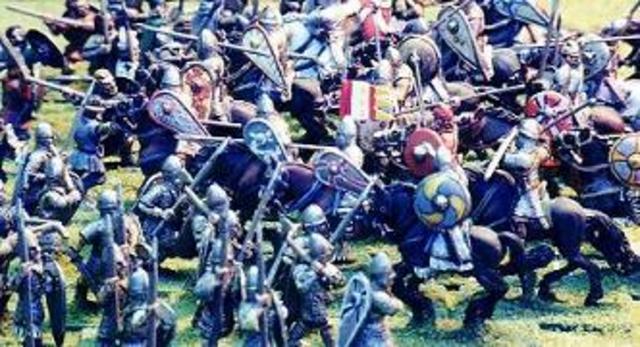