The Battle of Castillon

Considered as the last major battle of The Hundred Years War, it was fought on July 17, 1453. The engagement was an attempt by the English to retain what little territories they had left in France. Still holding onto Calais and The Channel Islands, King Henry VI of England demanded the return of a major lost province - namely Bordeaux. Taken by the French armies of Charles VII, he had no intention of returning the region. Oddly, the citizens of the City pleaded to King Henry to come and "liberate them". Perfectly happy with 300 years of English rule - they looked at disdain at the French Monarchy. Henry gave orders to ready an invasion force. Landing with an invasion force of over 3,000 men in October, 1452 - English commander Sir John Talbot established his beachhead near Bordeaux. Rumored to be a shrewd and feared military leader, (and of course with the help of the Citizen's of the City) - Talbot marched in and occupied Bordeaux.

Charles VII, initially thinking that the English would land at Normandy - was somewhat surprised at the move (and the City's help). His 3 armies rode out to meet the English. In early July, 1453 - Talbot's son arrived with another 3,000 reinforcements. With Charles forces arrival, the French set up their artillery pieces in a semi-circle just out of range of the City of Castillon (where Talbot had moved his forces to in an attempt to confront the French). The French constructed an impressive "artillery park" involving tree trunks and breastworks (including a protective rear position created by the River Lidoire). This was done to stop any English advance upon their positions. It is estimated that 300 guns were aimed at the City and it's English defenders.Talbot marched out with a relatively small force of 1,400 men (half of which were archers). Encountering only small pockets of resistance, this spurred Talbot on. The English had great courage at this point. The small pockets of French were falling back into retreat. Talbot and his son urged their men onward - surely this was a victory in the making! At this point the French artillery opened up.

It was said that with each French gun fired, 6 English fell at a time. It was a bloodbath. But still, the English would not yield. For almost 1 hour, they stood their ground until 1,000 cavalry from Brittany - fell upon their flank. It was over. An English retreat was ordered. Both Talbot and his son were killed. It was said that an artillery round took down Talbot's horse - pinning him underneath. A French axe did the rest. It would take an additional 3 months until the French had complete control of the region (including Bordeaux, in October of 1453). This would effectively end English control in France and signal an end to The Hundred Years War. 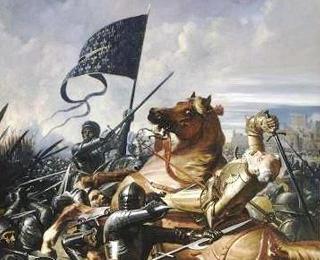