The Battle of Cartagena

Cartagena was a well off Spanish coastal Colony located in Colombia (SA). With a population of over 10,000 – it was one of Spain's “last” New World Colonies that still “turned a profit” for The King of Spain. Made wealthy by trade (more so by numerous Privateer and Pirate vessels that came to spend their loot), it was a sore spot to The British Empire. A need for a legitimate cause to attack Spain was not long in coming. It involved a human ear!. Under a previous Treaty (Seville – 1729), England agreed to Spanish concessions of not engaging with regular trade with many far flung Spanish Colonies. This kept Spain's Colonies more dependent with their “Mother Country” (and kept Royal and Merchant coffers full). Spain allowed England no more than 1,000 tons of import goods to be brought into “select” Colonies (namely Porto Bello, Panama). No doubt many Merchantmen, Privateers and Pirates ignored the Treaty stipulations out of wealth and greed (also due to no small part in the same sentiments felt by Spanish Colonists!).

Another stipulation of The Treaty stated that Spanish ships could board English ships (in Spanish waters) – to search for violations. In one such incident (1741), the British Merchant Ship “Rebecca” - commanded by Captain Robert Jenkins, was boarded. Resisting Spanish intentions, a heated skirmish happened between the Spanish Boarding Party and Jenkin's crew. Jenkin's ear was cut off in the fray. Preserving it, he eventually made his way back to England (and The House of Commons). After a brief “show and tell”, The War For Jenkin's Ear was declared. An English Naval Task Force was assembled. Slowly, Spanish Port after Port (poorly defended), fell. Porto Bello (previously a friendly Port) was captured and occupied. The English set their ryes on Cartagena. The Task Force, which included some 29 Warships, 22 Frigates, 12,000 Soldiers and Marines, over 6,500 Sailors and 135 Transport ships (a massive undertaking) – made their way to Cartagena. Many one-time “enemies” (Pirates), sought (and received temporary Pardons from England) – so they could participate in the fight (more so out of the known monies and valuables than revenging “The Ear”).

Cartagena (unlike other Spanish Colonies in the Caribbean), WAS well prepared for a fight. Many coastal Forts were well stocked with heavy cannon and well trained garrisons. With news of “The War”, the defenders of Cartagena prepared for the coming English Fleet. Some 3,000 Regular Spanish soldiers garrisoned The City. The Forts were manned with up to 3,000 Sailors. The Spanish unfortunately only had the resources of 9 Ships of The Line (also crewed with up to 3,000 men). The fight just to get close enough to land British fighting Forces was in it's own right – hell. Plumes of smoke, shot and shell rained into the Harbor with such fierceness that the bright noon day Sun was shadowed. After several hours of concentrated fire, English Forces were able to make landfall. Next came the eventual “Fort by Fort” fighting. Hundreds of British soldiers fell attempting to take the many Cartagenian Forts (many hit by friendly fire from their own ships trying to get close enough tosupport them!). The largest Fort of San Lazaro. For 3 days and nights, British Artillery from land and sea battered the Coastal behemoth. Wave after wave of British Soldiers and Marines assaulted the walls. Although taken, the British Landing Force was now severely diminished. The initial assault of The City of Cartagena was still ahead.

Weakened on both land and sea, half-hearted attempts against The City would end the 67-day campaign. England would retreat. Her casualties sat at 11,500 killed, 8,000 wounded with the loss of 10 Ships (plus 17 severely damaged). Spain suffered as well. Thousands of her soldiers and City residents died from the resulting water shortage and in-coming bout of Yellow Fever. Next, Plague set in (from the vast amounts of unburied bodies). Cartagena remained in Spanish control, but was never at it's post-1740s glory or richness. 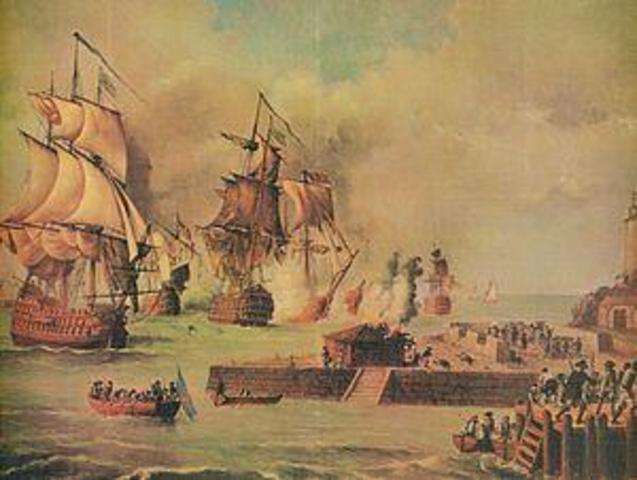