The Battle of Bunker Hill

At the onset of The American Revolutionary War, British Forces had occupied The City of Boston, Massachusetts. The deep water Harbor was ideal for the much needed reinforcements and supplies that would be needed for the “rebellion”. Roughly 2,500 British Soldiers garrisoned Boston (which was a City “”besieged”). The Colonial American Forces needed to remove the British threat and relive Boston. American Generals Artemas Ward and Isreal Putnam had effectively blockaded The British into Boston, and had determine to “seal them in” by the taking and reinforcement of twin overlooks to The Charlestown Peninsula (overlooking Boston Harbor). These two geographical features where known as Bunker and Breed's Hill. The Colonial Force numbered about 1,500 men. British General Thomas Gage's Scouts had informed him of this Force and that on June 16, 1775 – it had taken up positions on both Hills and were “digging fortifications”.

Gage alerted his command to action. He could ill afford The Americans to establish their final “foothold” on The Hills. Should they be able to fix cannon, they could fired down (and into Boston). This would be the end of the British Garrison (and Boston was NOT be to lost!). American Forces were well aware that they were facing a better disciplines and better equipped Army. The Colonial Troops literally worked through the night, digging trenches and building breastworks on both Breed and Bunker Hill. On The morning of June 17, The British Force boarded Transport Ships and headed for the Peninsula. Enroute, The Royal Navy bombarded nearby Charlestown (turning it to flame). Landing on the Peninsula, Gage decided to NOT advance towards The American Rear, but take a course straight UP to The American Lines on Bunker and Breed's Hill. Maybe Gage thought little of The American's “military mette”.

Perhaps he felt that they would “run when faced with Britain's Finest”. Indeed, several of The King's Guard Regiments were present that morning. At length, Gage lined up his 2,500 men in “traditional” Order of “Regimental Line”. The command was given to “Advance”. The Colonial Forces watched as the long “Red Line” began to advance in all it's finery. Bayonets fixed to musket, Officers swords raised in direction, and the Flags of many Regiments fluttered in the breeze. The British Line advanced slowly – more so due to the steady and increasing ascent UP the Hills. The Left Flank of The British Line aimed for Breed's Hill – with the Right advancing up to the front of Bunker Hill. At 50 yards, The Colonial Militia fired their volley into The British ranks. Supportive cannon from behind, ripped into the British Ranks. Great “gaps” opened up in the still steadily advancing British.

With each gap that was opened, it was quickly filled by the next rank behind. The lead Regiment, The Grenadier Guards pierced the defenses. Hand to hand combat ensured. Firing of musket and pistol was at point black range. The Grenadiers slowly began to fall back into the still advancing British Line. Breed's Hill served no better for safety. Volley after volley was fired (and returned), by both side. Back at Bunker Hill, American Forces had reached a stalemate. They were running out of gunpowder and ammunition. The British were NOT stopping their advance (despite the carnage of the slopes leading up to the twin Hill's were a “mass of Redcoats” - the debris of dead and dying British soldiers, so thick – it was said one could walk over the battlefield and not touch the ground).

Unwilling to surrender, American Forces at both Hill defenses, fired last successive volleys into the now breaching British soldiers (of the Rear Guard Regiments). The American executed an orderly retreat from the Hills. The British were to badly damaged to pursue. The Colonial Forces escaped to fight another day. Boston would still remain in British hands at the end of the day (as would the Hills). However, the cost to The British Forces were immense. Of the 2,500, that advanced the slopes of both Breed and Bunker Hills – 1,500 were killed or wounded. The Americans fared better with 140 dead and over 300 wounded. The Battle of Bunker Hill (and Breed's), proved several things to both sides. For The British, it showed that this was no mere “rebellion” - it was a War. For The American Forces, it showed that Britain was not going to “let go” so easily. Both sides would settle in for a long and bloody affair. 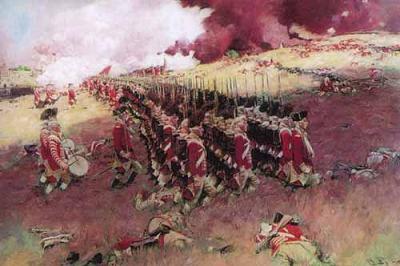