The Battle of Belvoir Castle

Fought July to August of 1182 in Israel, the forces of Baldwin IV of Jerusalem - engaged in a series of skirmishes with Ayyubid forces under command of Saladin. Saladin and his Egyptian Army set about a series of harassing actions in the region. Having attempted (but failed) to take Jerusalem, as well as an all out battle at Montgisard in 1177 - Saladin needed a victory. He got one at Marj Avyun. His "honor" against Baldwin IV satisfied, Saladin set about to get a truce with the Crusaders. It worked until the Templar commander Raynald of Cantillon broke the truce by repeated attacks against Muslim caravans trying to move through the region. Saladin assembled his armies once more. In 1182, Saladin attacked Montreal and Krak. His nephew, Farrukh Sah and a force reached Damascus. The local Emirs (having entered into a truce with the Crusader Lords), no scuttled it in favor of Saladin. The Crusading armies reached and crossed the Jordan River in an attempt to reach Damascus and draw Saladin into a possible fight.

The Crusader patrols found Saladin operating closer than they thought. Fearing possible greater numbers, they stripped all garrisons from nearby fortifications. Basing the army outside of Belvoir Castles, Baldwin waited. It was a short wait - Saladin arrived the next morning. The Crusader infantry were drawn up in close quarter with support troops guarding their flanks. The Saracens were kept at a safe distance by the Crusader archers. Heavy and light cavalry was arrayed to the sides of both flanks (advancing at the same pace as the infantry). This was a tactic that was becoming popular in the Middle East (as opposed to sending one's cavalry out in charge after charge).

Saladin in the meanwhile, relied on his old standard - The Horse Archers. They used their "hit and run" tactics as expected. This time, the Crusaders did not take the bait. Unable to break their lines, Saladin withdrew. Saladin now attempted to engage the Crusaders in multiple battles. His plan was to split the Crusaders. First he lay siege to Beruit and well as attacking numerous Crusader villages. Baldwin continued his advance to Tyre, there attempting to raise an even larger army. Saladin's spies told him this. He decided to cease all operations (perhaps wishing to enlarge his army as well). Baldwin and Saladin never got the chance to have one last "super battle". His leprosy had advanced to an incapacitating stage. He was taken back to Jerusalem, where he made his brother-in-Law, Guy of Lusignan Regent and commander of his armies. 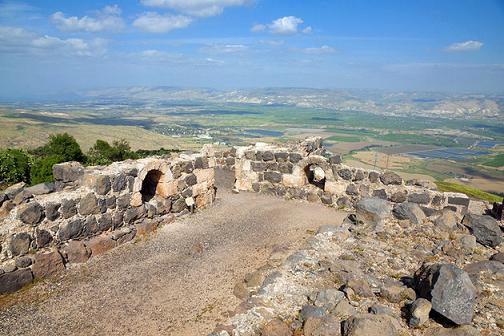