The Battle of Bauge

After 6 years of Combat, English King Henry V had been successful in his Campaigns in France. From his epic success at The Battle of Agincourt (1415), the thought of a “Hundred Year War” was far from a reality in The King's mind. Some set backs aside, Henry and his Army of 10,000 had done well to establish his claim to The Throne of France. France however, had suffered greatly. Losses in Soldiers were are to replace and many in France were not initially on The Dauphin's side. Luckily for him, an Alliance with Scotland (bitter towards England after Centuries of oppression and eager for independence yet again), supported The Dauphin with Men and materials. Henry, over confident, dispersed his Forces too widely throughout France. The French saw this as an opportunity and The Dauphin raised yet another Army. He sent a Force of 5,000 to attack Henry at Bauge. Henry's nearest Armed Force was 4,000 – but he only had 1,500 effective and armed.

THE BATTLE:
The English Commander, The Duke of Clarence did not appreciate the size of The Franco-Scottish Army. They were dismounted and mounted. A concentrated Center of Light Infantry was supported by Scottish Archers. The Duke's Force was basically Infantry (Men At Arms) and no Archers (Longbows or otherwise). The English mounted Knights were few. Feeling that The French would scatter and break, The English Forces approached The French Lines on March 22, 1421.
The English Charge was met with a hail of Scottish arrows. The English Infantry were not heavily Armored (using Light Chain Mail), and were mowed down. The mounted English Knights tried to support them, but during their rally, The Duke was pierced by a French Lance. The English Force soon slowed and surrendered, Commander-less.

AFTERMATH:
1,000 English dead littered the Battlefield of Bauge. 500 had been taken Prisoner by The Scots. Neither The France nor Scots pressed their victory and continued on the attack of all other English Forces. Henry V in the meantime had not been in France, He was recalled to English to deal with issues. The news of The Battle and subsequent claims from The Dauphin of a “Free France”, caused Henry to raise an even larger Army and return to France in 1422. However, he would die of dysentery before his Campaign could effectively unfold. 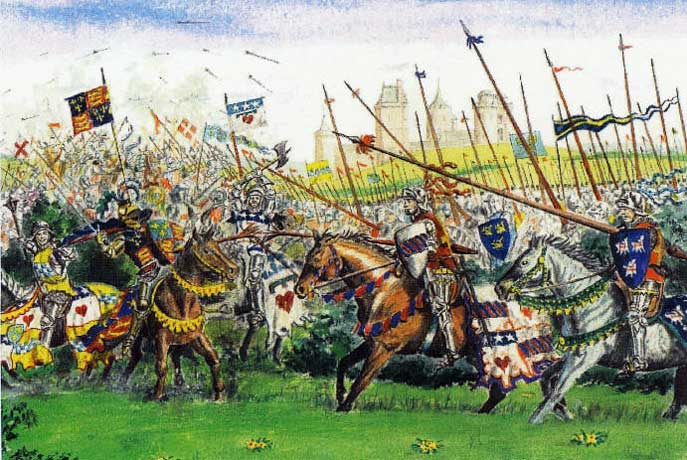