The Battle of Barien (1097), was part of The Reconquista (a 780 year period of history that took place after the Islamic Conquest of Christian Iberia and would continue until the re-establishment of The Spanish/Portuguese Empire). Bairen (now Gandia, Spain), was were the forces of famed  Valencian knight - Rodrigo Diaz (nicknamed "El Cid") fought The Almoravid Dynasty of Muhammad Tausfin. After his conquest of Valencia (Spain), El Cid and The Kingdom of Aragon were both aware that separately, they could not defeat Tasufin. They formed a military alliance and combined armies. El Cid began the invasion of Almoravid territories in December of 1096.

Using the now captured Benicadell Castle as his staging point, El Cid's armies moved out. Muhammad Tausfin's armies were on the march as well. Planning to intercept El Cid at Xativa (now Eastern Spain). Tausfin knew that Benicadell Castle was the only important stronghold he had to contend with. He spend most of January, 1097 launching raids into El Cid's moving army. Hopefully weakened (after a time), they would unable to continue (let alone reach their defenses). The advance parties of the Valencian and Argonese forces were made of sterner stuff however. They split their forces and returned to Benciadell (safety), while El Cid continued North. Encamping his army outside of Bairen, they waited. Unknown to El Cid, the Almoravid armies had taken the high ground positions around El Cid's camps. Archers and crossbowman hid and awaited for the attack signal. The arrows fell into El Cid's camps like a thunderstorm.

Realizing that he was caught in a crossfire between the two enemy held hills. El Cid rallied his troops into line formation. They charged through the narrow valley between the hills, taking fir all the way. Next, as incredible as it sounds - El Cid and his army charged first up one hill and then up the other. The sight of these "supermen" so terrified the Almoravid's, they broke position and retreated. It was said the panic and rout was so great, many of the the rushing enemy drowned trying to cross a nearby river. The exact numbers and casualties figures are too disputed for accurate reporting. It must have been major. El Cid's men did not pursue, stopping first to raid the Almoravid camps of treasure and supplies and then marching back to Benicadell Castle -  victorious! 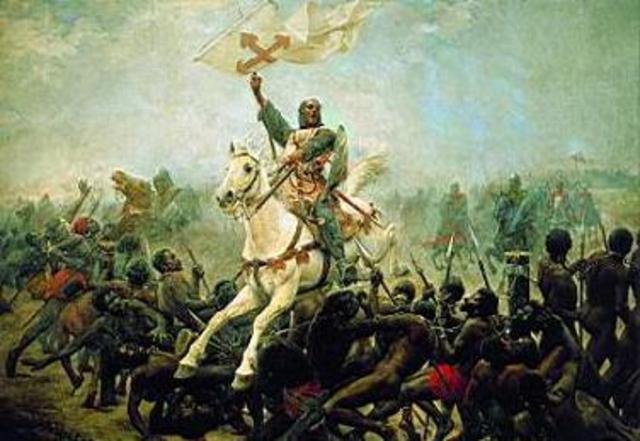