Part of The Frankish Civil War (715-718 A.D.) - The Battle of Ambleve was fought in 716 A.D. near Amel (present day Belgium). Charles Martel (Mayer of The Palace of Austrasia), fought and defeated King Chilperic II (Neustria) and The Duke of The Frisians. This was the first major victory for Martel. The Battle of Ambleve also showcased Martel's military genius, which would be prevalent throughout his life. Austrasia was under constant attack from Neustrian and Frisian forces. Still, many of the peoples were drawn to Martel (because of his linage to The Pippinnid Family).

Able to raise a suitable army, Martel moved his army toward Ambleve. Arrayed in standard battle lines (of the day), upon arrival of the enemy, he ordered his troops to slowly move away from them. This "retreat " was a feint. As his enemies fell upon them, Martel's troops would wheel around and strike viciously. Then, resuming the march - this technique was repeated. Eventually, his foes were destroyed. Martel's tactic served him well. His military cunning and innovative techniques were a highlight of his 25 years of on-again/off-again warfare. 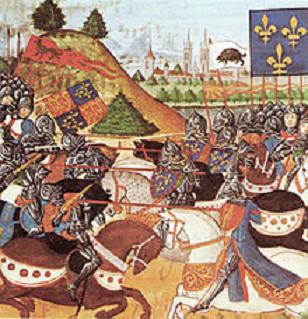