The Battle of Agincourt

Fought on October 25, 1415, Agincourt (France), was a decisive English victory at the start of the “2nd Period” of The Hundred Years Wars. English territorial gains in the 14th Century had been undone by a resurgence of French patriotism in the later part of the century. By 1415, King Henry V (England), restarted hostilities because of the internal French disunion and mental instability of French King Charles VI. Henry invaded France with a 10,500 man force. He was well equipped and his Army was well trained and suited for the task at hand. He first attacked the Port City of Harfleur (which held out for 5 weeks!).King Henry had not expected the City to be so resistant. He lost 40 % of his men as a result. Still, after Harfleur, Henry marched his remaining force some 120-miles to Calais (in some of the worst weather Regionally, in years).

When Henry met The French at Agincourt, they numbered 6,000 – were bone tired and now outnumbered (The French amassed almost 30,000 men!). Henry's Army consisted of 900 unmounted Men-at-Arms (his center of Line), with some 5,000 Archers on both Flanks. The rest were “Final Reserve”. The British Archers self-erected hedges of sharpened wooden spikes, called “Archers Stakes” to their front. This tactic was to foil and hopefully break The French Charge (which was sure to come).Arrayed with 8,000 Foot Soldiers first, followed by 1,600 Cavalry, with another 3,000 to 6,000 more Foot Solders – that remaining 20,000 French were held in a Reserve line.

It was thought to be an impending “slaughter” (to The French). The French failed almost immediately. The Armored Cavalry failed to break The British Line (thanks to The Stakes and the “new” weapon of choice “The Longbow”). Line after line of French Heavy Cavalry fell into the now plentiful mud being created. As the French Cavalry (those surviving that is)m turned to retreat (run rather), they collided with the advancing French Foot Soldiers.

Chaos reigned supreme. Volley after Volley was poured into the now floundering French. French Knight (not be be undone), tried to engage in hand-to-hand combat with the English. Unarmored and capable of much better mobility – sword and axe, all took their toll on the few remaining French Knights on ground. Line 2 of The French Army fared far worst, hidden in side forest were more British Archers. This time they were joined by Crossbowmen. The two classes raked The French Lines into oblivion. A few hundred brave Frenchmen of the Third Line went forward. The rest retreated.. The entire Battle of Agincourt lasted only 1 hour long. 600 French Noblemen were killed and 1,000 captured (for ransom, of course).

The remaining French loses were tallied at 6,000 dead. The English lost 300 total. They almost lost King Henry (who was hit on the back of his head by a glancing French Sword). The battle may had ended differently had Henry died that day. Henry reaped the rewards of Agincourt almost immediately. He was heralded as a great military commander for pulling off such a feat. England no longer lagged in sending it's Sons. Recruitment into Henry's Army was as record. The battle did do something unexpected for The French. It hardened their resolve to beat The English – EVEN after such a crushing defeat. It also showed The French the coming great importance of Archery (The Longbow) – in battle. 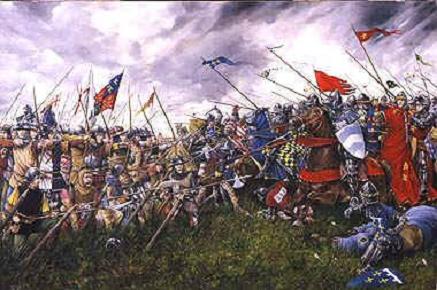