The Battle of Adrianople

Fought on April 14, 1205, the kingdom of Bulgaria formed an alliance with factions of the Byzantine/Cuman forces. Creating a combined army, Tsar Kaloyan of Bulgaria - felt he no longer needed to maintain loyalty to the Latin "King", Emperor Baldwin I.  Emperor Baldwin (upon hearing this news and already preparing for the Fourth Crusades for Jerusalem), decided he would detour into the region and quash this rebellion.  Adrianople, had been fought over (and around) since Greeco-Roman times. Many Kingdoms have vied for control over the region. Baldwin I decided that it WOULD remain within his Principalities.

Upwards of 30,000 Crusaders moved past Adrianople that day. Advance units reported Tsar Kayolan's forces were positioned in the North. The first Crusader army under command of Louis of Blois, began the advance. A relatively flat land lay ahead - with rolling hills to the west and moderate sized mountains to the east. The land ahead, while solid - was starting to give way to marshland. This was of no consequence to Blois' army. Close behind them, was the additional army under command of Baldwin I. His army too was unencumbered by troubles. Bolis' troops soon uncovered a problem. Directly to their front, the Bulgarians had placed pitch ditches and man-traps - many of them. With no way to go around them, the army stopped - more so to find a way around the obstacles. At worst, they would have to wait for the engineers to deal with the problem.

Suddenly, massive lines of Bulgarian/Cuman heavy infantry rolled over the western hills while at the same time heavy cavalry charged down from the eastern mountains. Both flanks of Blois' army was attacked at the same time. Unable to go forward, they bogged down, trying to fight both assaults. Soon Baldwin would arrive. Help would come! Baldwin's march was uneventful until about the same time. Again waves of heavy infantry and cavalry, following the same attack plan used on Blois, descended upon Baldwin's forces. They began to fight and advance. Baldwin then ran into a bigger problem. He found himself trapped with Blois' rear guard falling back onto his front positions. Baldwin, attempted to turn his forces and head back toward Adrianople. Then "the other shoe" dropped. Several days prior, Cuman light cavalry had started their advance from behind the eastern mountains. Heading to Adrianople, they immediately headed north - into Baldwin's rear guard. Baldwin effective was surrounded. The Crusader forces fell and Baldwin was taken prisoner. No ransom was request and none was offered. Perhaps the Papal authority was upset that the Crusader army was lost this way. No one is sure. The aftermath of the battle is more legend than anything else. Taken into captivity by Tsar Kaloyan and keep at his Court, it was rumored that Baldwin tried to seduce the Tsar's wife. The Tsar had Baldwin killed and made his skull into a drinking cup. A letter was sent to The Pope, telling him Baldwin died in captivity. 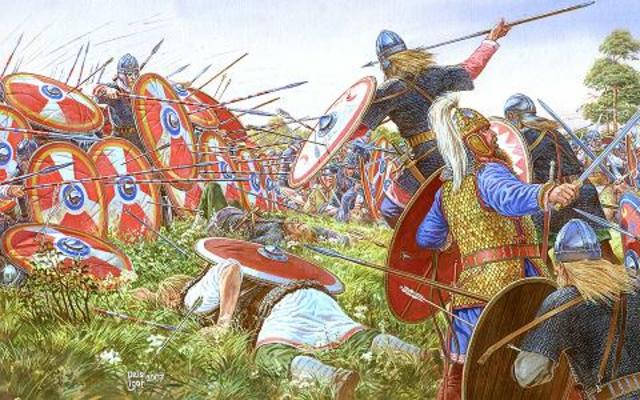