The Aztec Empire of peoples was a Mesoamerican Culture that existed from roughly the 14th to the 16th Century A.D. It is a common misconception to use the term “Aztec” with regards to describing them. The culture that was The Aztec was made up of a “Triple Alliance” of peoples who came together through dynastic rule to form their Civilization. The closest “true” Aztecian peoples were possibly located in what would eventually become their Capitol City – Tenochtitlan (near present day Mexico City).

A trading and commerce peoples, The Aztec were also heavily immersed in a Warrior ethos. This cultural development made them the dominant (and most effective “rulers” of Middle America). The Aztec conquered much of the smaller non-”Alliance” peoples – either through direct assimilation or by creating Colonies. These Colonies provided goods and men for it's “Armies”. The Aztec dominance of the Region would only come to an end with the contact of Europeans (namely Spain).

A series of wars and exposure to diseases from Europe would both serve to destroy The Empire. For all their fierce fighting abilities, The Aztec could not overcome gunpowder. The following series of articles will outline Aztec Arms and Armor and how they overtook a large portion of Central America. 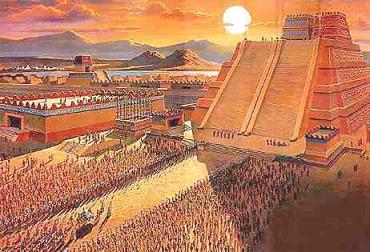