Considered by many Historians as being the first “true’’ Armored Warship incorporating “ironclad” principles of ship building with traditional warship (wood) design – The Imperial Russian Cruiser known as the ''Admiral General” was launched in 1873. Taking 3 years to construct in St. Petersburg, She was intended to be the first in Her Class of “modern” Russian Warships. Although envisioned as a “Corvette’’- Class, Her eventual size and armament changed this. Displacing over 5,000-tons, ‘’Admiral General” (so named for the Imperial Russian Naval Rank) – was nearly 300-feet in length and stood (Beam) at 50-feet. (5) Vertical Boilers pushed a massive Turbine, allowing for 12 knots (or 14-mph).  She was also semi-rigged for full Sail configuration, if needed (although most of this was removed by the turn of The Century. Her Hull and Deck armor plating ranged from 4 to 6-inches throughout. The ‘’Admiral General’’ crewed over 490 Officers and Men.

Her fearsome armament included (6) 8-inch Main Guns, (2) 6-inch Guns and (2) 2-inch Guns. She also supported a single 15-inch Torpedo Tube. For over 30 years, “Admiral General” served as a Ship of The Line in The Imperial Russian Navy, even surviving The Russo-Japanese War. Reclassified a Training Ship in 1909, she would also survive WWI and WWII – until finally being scrapped in 1949. 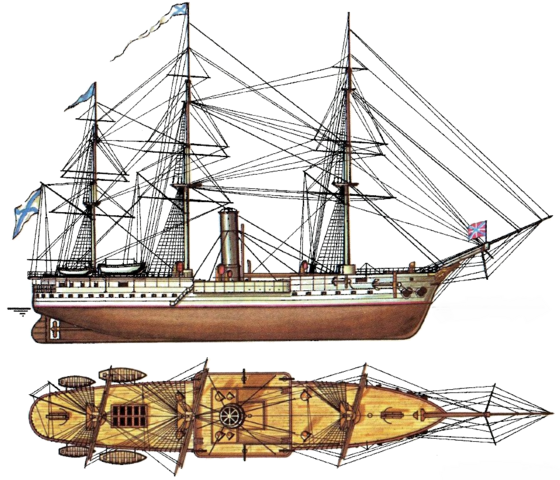