A well known Hanseatic League warship from 1566, this German Galleon-Class vessel was once considered the largest warship built during The Era. She displaced 3,000 tons and was over 250 feet long. She was over 50 feet high (beam). Capable of crewing over 1,000 Officers, Men and Transport Troops – she was armed with over 138 cannons of various poundage (the largest being 48-pound versions). Primarily used to protect Commerce shipping during The Northern Seven Years War (1563-70), The “Adler Von Lubeck” never saw action due to The Treaty of Stettin. She was converted into a Freighter and served for 20 years before she was dismantled. Her guns were preserved and are still on display today. 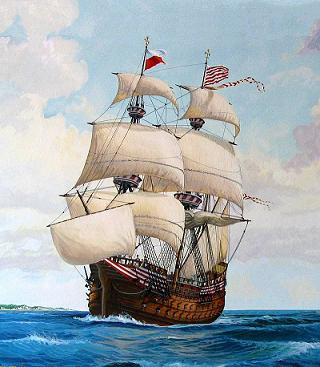