A well known Profession in The Middle Ages, A Thatcher performed several important functions in a Shire, Village or Town. They were responsible for the construction and repair of Roofs, as wells as the creation and repair of Fishing Nets, Ropes and other related items. Most Thatcher’s maintained a “Family Business” mentality (Father to Son). However, Thatchery would become an apprenticed Guild around the 14th Century as well.

Considered a skilled Profession, the development of creating roofing and it’s repair was linked to the evolution of habitable  living structures. After Man’s “departure” from “The Cave”, Huts and related would evolve into walled living structures of various patterns and designs. With the finalization of the traditional living structure of “4-walls”, the most obvious component to keep out The “Elements” – was a top or “Roof”. Over the Centuries, different types of Roofs were attempted and used. A common development was an open wood framed construction, upon which was placed insulation. This was needed to maintain heat inside the dwelling during Winter months (or in prevailing Cold climates).

The use of bundles of Straw, Hay and related organic matter were used as a primary foundation for a Roof. A Thatcher would tie together such bundles in a fashion similar to a “blanket” or layer. This may be duplicated several times (although more layers meant more work, supplies and monies). Onto this layer of bundles, matting (similarly tied or “thatched” together), was applied. Eventually, the form of a triangular or apexed Roof would be formed.

Naturally, such organic based roofs faced several pitfalls. Fire (a very common issue in The Middle Ages) as well as long-term survival of the product were the most common. Hence, a Thatcher was often used to repair (or replace if one was wealthy enough) a Roof every season.

The Thatcher’s skill would lead to the side production of Ropes (from Hemp) as well as Netting. Both were vital for food production and everyday life. With the development of stronger and more permanent roofing designs and materials, the true Thatcher as an Occupation would cease in general (although it would remain in practice on a very small scale in some Countries in Central Europe). 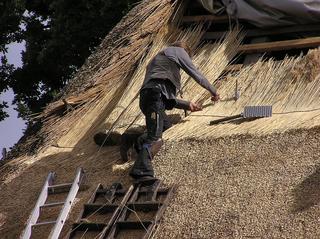