Devised and deployed from 1858 to 1963, The “Texas Tower” Systems was an early warning Radar deployment which was set up off The Eastern Seaboard of The United States (primarily off The Coast of The State of Texas – hence it's name). A total of (4) were deployed (as far as Cape Cod, Massachusetts). Their primary mission was to augment other early warning systems in place to alert The US Military to Enemy Missile and Aircraft attack.

Each “Golf Ball” or geodetic shaped “Dome” was 55-feet in diameter. The (3) Pod configuration was placed on Off-Shore Oil Drilling Platforms, 67-feet off the Sea surface. Submarine cabling was originally used for landline connection, with plans to use Microwave. However this was deemed too costly at the time. UHF and VHF were applied. The Towers monitored several hundred miles in all directions, with “distant” warning time increased to 1-hour of detection. Manned 24-hours a day, an Air Force Staff of 15 to 25 could be billeted on The Towers. The Platforms also supported Helicopter launch and observation Missions. 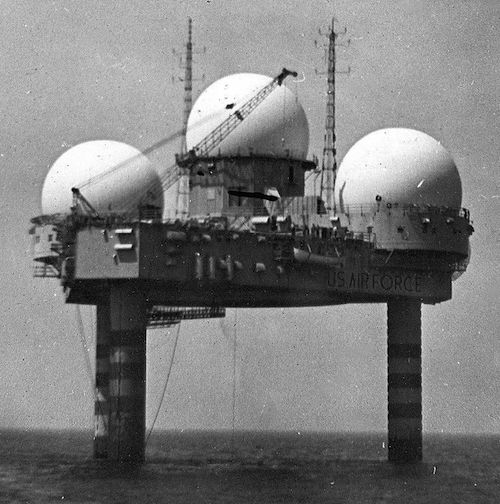