The Texas Rangers were a unique feature in the History of The American West and Texas. Formed from Volunteer Mounted Irregular Militia at the start of The Texas War for Independence, they served with great distinction throughout The War. With Statehood, Texas Rangers guarded the established Border between Texas and Mexico. With the start of The American Civil War of 1861-65, most Rangers were absorbed into The Confederate Army. With The South’s loss of The War, The Rangers were disbanded. However, their use as Peace Officers in the vast Region of Texas was not lost. With Texas re-ratification of The US Constitution, The Rangers were reformed.

Organized as a Paramilitary Organization, Rangers are formed into Companies – with a Captain Commanding each. They operated on their “own Nickel”, providing their own Horses. Unlike traditional Law Enforcement who could not claim Bounties on Wanted Felons, Rangers could. It was not uncommon for Rangers to pursue their “Charges” out of State Boundaries. This was before the Federalization of Boundary limitations.

Rangers did not wear Uniforms. They did by and large wear White Shirts. This, and their Gray Stetson Hat – as well as their rounded “Star Badge”, became their symbols. Recruitment was difficult. Only proven Expert Horsemen and Shots were considered. Unlike most Peace Officers of The Era, a Ranger had to be above reproach and highly moral. The Rangers were noted for their capture of some of The West’s most Wanted Outlaws. Sam Bass and his Gang, John Wesley Harden (so “mean” he once shot a Man for snoring too loud) and of course, the 20th Century Bank Robbers Bonnie and Clyde. The Texas Rangers also foiled two assassination attempts. One one US President William Taft and another on Mexican President Perfirio Diaz.

The most famous Texas Ranger actually did not exist, but “his” Story did much to propel Ranger mythos into The American consciousness. “He” was “The Lone Ranger”. A Hollywood “creation” (taken from those infamous “Dime Novels”, previously discussed), was a Texas Ranger, massacred with an entire Company of fellow Rangers. Barely alive and the only survivor, he is nursed back to health by the unlikely ally of Tonto  (a Native American). Using a Mask to conceal his identity, The “Lone Ranger” rides to avenge his fallen Comrades and to uphold The Law firm those who need his help. His “Calling Card”……..a Silver Bullet! Today, The Texas Rangers still hold an honored Position within Texas Law Enforcement  (akin to The State Police). They still wear The White Shirt and Gray Stetson (although the use of Police Patch identification is now worn). They use modern Police vehicles, but each still maintains his own Horse, which is used to traverse terrain wear vehicles cannot go. Their Motto is “Courage, Integrity and Perseverance”. 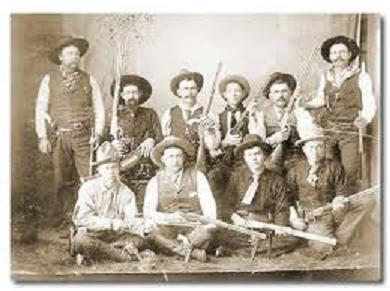