A classical ancient Roman battle tactic, The Testudo (derived from the world "Turtle" or "Tortoise" Shell), was developed prior to the 3rd Century BC from Greek origins (known as the "Chelone"). Roman was an adaptive Culture. The effectiveness of the Formation quickly help establish Roman as the predominate military power in The Ancient World. In application, The Tesudo could be used by no less that 15 soldiers (although it was more effective with numbers of 25). Considered a small Unit tactic, it was seldom used in numbers greater that 40.

Arranged in a standard "Square Formation", the Front Rank of soldiers would raise their Shields to their front, covering the shin to just below the eyes. "Side" Ranks would raise their Shields to a similar height over their left or right side, or Flank. Soldiers of the 2nd Rank (center), would raise their Shields over their heads, resting them on their helmets from stability. This created a "Shell" which protected the entirety of the Formation. As previously discussed, The Scutum Shield was developed for this (and many other battle Formations). The curvature of this Shield wad ideal for The Tesudo tactic. Suitably "locked" together, the Formation was in essence a "mobile Fortress". Soldiers were taught to extend their Spears (Pilum), through strategic locations in The Tesudo, stabbing outwards at any approaching  (attacking enemy).

Forward momentum was accomplished by a half-step movement (or shuffle step). A drawback to The Testudo was it's slowness, aggravated by the heavy Shield and Armor  (which impeded full mobility. By the 3rd Century BC, The Tesudo was the dominate form of Roman Military "might" on the battlefield. The Byzantine Empire adopted a form of The Testudo (known as the "Foulkon"), which would continue well into the 7th Century AD. The tactic is still employed by many Law Enforcement Agencies worldwide as a form of Urban Pacification  (with regards to Civilian Disturbances). 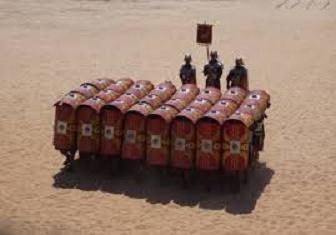