In The ancient Roman Legions (Army), The Position of a ''Tesserarius'' was one which was occupied by either a Senior Legionnaire or Junior Grade Officer. The Title was used in a Garrison (mostly when on Campaign). The Tesserarius selected a Guard Mount which monitored various assigned Posts throughout The Fort or Camp throughout the night. Much as in Modern Armies, ''Passwords'' and ''Counter Passwords'' were devised. These would be given to a Guard Mount to be called out to an unknown person. A ''friendly contact'' would ''know'' the proper response to the ''Call of The Day''.

The Tesserarius was identified by His long, Wooden Staff (6-feet). This was topped by a Wooden or Iron Ball. As much of a symbol of His ''Position'' as much as a weapon (club), they were most dominant in the late 2nd Century BC to 3rd Century AD. 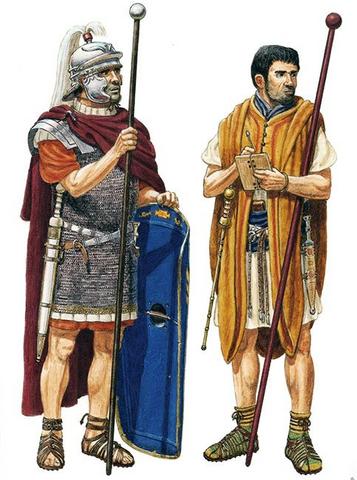