As we have seen, in Ancient and Medieval India, The War Elephant was a dominate form” of Heavy Cavalry, often used as a firing platform for Archers and Spear Throwers. As such was the height of The Elephant, this created a type of natural “Tank” of sorts. The hulking beasts could be “turned” and caused to sun amok, but this was a difficult tactic for the Attacker. Also, it was known that while The Elephant had “soft spots” which could be attacked, all in all – they were very tough to strike down, that is save one spot – the Foot Pad. The Pad (or sole of the Animal) was very soft. Protected by a thick circular covering of Hide. Given the size of the Animal, the Pad was quite small. In this the tactic of “Tent Pegging” developed.

Ancient Cavalry practiced Spearmanship and Archery from a gallop, often aiming at very small targets placed on wooden Tent Pegs in the ground striking the small target was practice for doing the same to the soft Pad of the Foot of The Elephant. Once struck (by causing them to rear up), the Animal felt intense pain and would run amok into it’s own “friendly” lines. 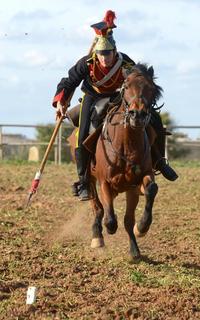