Much has been written of the iconic Headgear known as The “10-Gallin Hat”. Seen through the “eyes” of Hollywood and the rest of the World as the official Headgear  of The Western Cowboy, The Hat was the symbol of popular Western Films from the 1920s forward. It was unfortunately unheard of in the 19th Century. The term “Ten-Gallon” Hat was first coined in 1925. The exaggerated tall conical Crown, often “pinched” in wear, was strictly a Hollywood invention. Hats of the nature worn by Cowboys, Lawmen and Outlaws, were often simple and poorly made (with the exception of several Stetson Models, to include The “Boss of The Plains” Hat).

In some cases, even the iconic “Boller” or former Military Kepi or Campaign Hat wad used more. Most traditional Hats of this type, did not do well in rain and excessive climates. They would quickly loose their shape. The origin of “10-Gallon” was referring to the amount of water which the large Hat could hold (which defied logical applications at any rate). Some Historians cite to The Spanish  (Mexican) term “Tan Galan”. Thus phrase referenced the “fine or handsome” appearance of one’s Hat. This term, although known, was not spoken in wide usage North of Mexico. 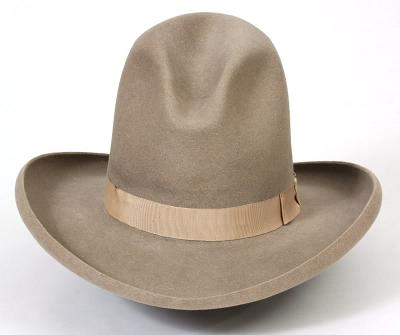