Tapestries are decorative fabrics into which a design is directly woven into a piece of cloth. The method of construction makes them heavier and more durable than dried or painted cloth. Due to the skill and labor needed to create one – in The Middle Ages, it was considered a privilege to won one. Decorative woven wall hangings not only in Europe by The Middle and Far East. At the beginning of The Middle Ages, embroidery was very popular (as were dyed or painted cloth designs). It was not until the 13th Century did Tapestries become entrenched into Medieval life. Before The Crusades, Silk Weavers from Constantinople had begun to settle in Greece. Soon nearby Italy as well became a “mecca” for these Craftsmen.

By the 12th Century, Sicily had become the prime provider of the decorative woven Industry. It was common for many European Crusaders to return home with these tapestries for use in their residences. Most Tapestries depicted everyday life (although images of Saints and Biblical matters were just as popular). In addition to art, the Tapestry served another very important purpose – warmth!. Because of their very thick material (and most Tapestries were quite large) – they were ideal to cover Castle and Hall walls (which retained cold). The Tapestries retained heat from various sources. Therefore, the more Tapestries one had, the greater the “comfort”. Due to the cost of making and importing them, only the very wealthy could afford them. In addition, Tapestries could be transported from one Castle to another (and were often looked upon as heirlooms. The actual construction of a tapestry required great skill and talent. First an Artist would create a sketch or “cartoon”. Another Artist would enlarge and create a full-scale pattern for a Weaver to follow.

The Weaver would then work from this pattern. Many often embellished the designs to suit their own artistic “tastes”. Eventually falling under control of The Guilds (which ensured quality of work) – only quality materials were used in their construction. Wool was the most common material. High quality dyes were also imported to make the images more vibrant (and last for generations). By the 14th Century, France had become a major center for Tapestry creation and sale. However, with the destruction of Arras, France (the main hub of manufacturing) by King Louis XI in one of his “Religious Wars”, the business picked up and went to Spain and England. Many of these displaced Craftsmen would also go back to Italy.

With the rise of The Renaissance Era, Tapestries began to lose their appeal. The influx of highyl stylized Painters rendering now “Classic” pieces – became the “new (and lasting) fad”. Seen as archaic, a small minority still maintain the Tapestry Art (with select Medieval pieces netting a hefty sum). Of historical note, the World famous “Bayeux Tapestry” which depicts The Norman Invasion of England, is NOT a true tapestry! It is a pure embroidered cloth without the classic heavy backing or detail in craftsmenship. 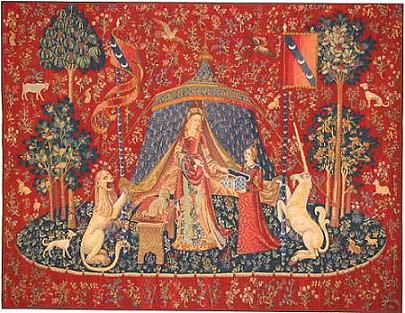