Born in 1336, he was born Timur Leung (son of a Turkish Army Commander). His future exploits would be chronicled by such writers as Poe and Lord Byron. His dream was to re-establish the “lost glory” that was The Empire of Genghis Khan. As a young man, (as most Turkish boys were expected), Timur was trained extensively in horsemanship. This training (which was harsh), resulted in an accident which prevented him from ever bending his right knee or being able to raise his right arm – ever again. As a result, he was nicknamed “Timur The Lame” (which would become Tamerlane). The power of The Mongols had greatly decreased since the time of the “Great Khan”.

Most of the once united Tribes were now splintered into warring and opposite factions. Tamerlane came forward and claimed to be the direct heir to the blood of Genghis Khan (although he offered no proof and apparently no one questioned him!). In 1361, he became Chieftain of The Timurid Tribe, with the aid of his Brother-In-Law, they attacked and dominated The Chingisid Tribe. Now united, Tamerlane was sole ruler of Transoxiana in 1369. By the 1380s, Tamerlane and his sizable Army of over 300,000 went after Iran and Persia. It was said that of his Raid on Isfizar, he buried 2,000 Persians alive (although he claimed he did not).From 1382 to 1397, his Armies took on the Russian “Golden Horde” (of which he devastated them). In true “Khan” fashion, Tamerlane did not stop. He launched his 500,000 man Force into India (capturing Delhi and slaughtering some 100,000).

When The Hindu Army counter-attacked with War Elephants, Tamerlane had straw tied to the back of his camels. Set on fire, the poor beasts were “charged” into the frightened elephants. It was a rout. Turning towards Damascus (taken in 1400) and The Byzantines, Tamerlane's Armies gave these enemies the “option” of joining forces or dying (badly). Most took the job. By 1404, Tamerlane was an old man. He had achieved his boyhood dreams. He had begun to plan The Invasion of China, when he died of drinking too much wine in 1405. Although fettered through life with his handicap, it never stopped Tamerlane's need to unify his “world”nor achieve his goal. He trained and maintain a discipline within his Armies that payed dividends repeatedly in battle. Each man knew his job, and each man knew he was part of a greater “team”. His ability to use psychological warfare was unequaled. At Damascus, he was reported to have said to his enemies... “I am The Scourge of God, sent to chastise you, since no one knows the remedy for for iniquity – but me! YOU are wicked, but I am MORE wicked than You". 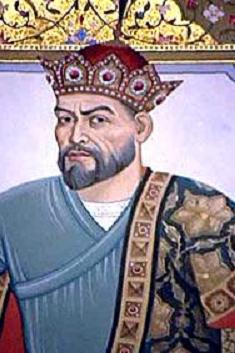