The ''Taif'' was a ''Mecidiye''-Class Frigate of The Ottoman Navy. Launched in 1846 (as a Passenger Ship), ''Taif'' would be the Flagship of The Ottoman Navy during The Crimean War of 1855, She would first fight at The Battle of Sinope. Engaging a Russian Warships, ''Taif'' exchanged fire for nearly 7-hours before having to withdraw. She would be the only Ottoman Vessel in The Fllet to not be destroyed that day. After The War, ''Taif'' would serve with The Imperial (Royal) Fleet. She served as Foreign Diplomatic Escort to several European Heads of State visiting Constantinople – to include England's Prince Albert Edward (later King Edward VII). Decommissioned in 1867, ''Taif'' would be broken up for scrap. A ''Paddle-Wheel'' Steamer, ''Taif'' displaced over 1,400-tons. She was 225-feet long with a 40-foot Beam. Twin Paddle-Wheels were powered by (2) Boilers which produced 10-mph. Also capable of being Rigged for Full Pattern Sail (3 Master), ''Taif'' crewed 320 Officers and Men. Her Armament in original deployment included (2) 10-inch Guns with a total of (66) 32-Pounders deployed throughout. 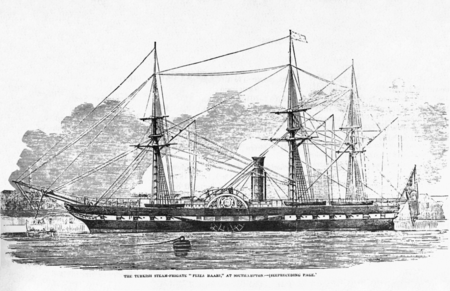