The Tabor was a popular musical instrument found (beginning) in the 13th Century AD. Possibly developed from similar more Ancient Roman instruments, The Tabor was common to France, Germany and England. Skill was required to perform the instrument – which is described as ''a One man Band''. The Tabor consisted of a flattened snare drum, a single drumstick and normally a wooden flute. The Drum was made of wood and was 2.5 to 3-feet in diameter. The depth of the Drum varied, between 4 to 5.5-inches. The drum face was either stretched hide of lamb, calf or scraped leather (to a fine layer). Affixed to tension ties, these were either tightened or relaxed to create The tabor ''pitch''.

Normally, only one drumstick (of hand shaped wood) was used. The striking pattern or ''beat'' involved one hand hitting the face of the drum and quickly bringing the rear quarter section down on the wooden rim of the drum. By this, the ''sound'' of twin strikes were made (as one could do with two such sticks). The other hand of the player was ''occupied'' with the hand flute. In essence, one was play two instruments, in sync at the same time. Popular with some Minstrel and Street Players, The Tabor was also played (with some skill) by none other than England's King Henry VIII (who also played other musical instruments as well). Today (although antiquated), The Tabor can still be found used by various Historical Groups or Folk Music Players. 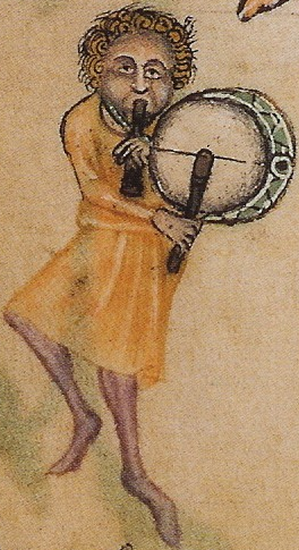