The legendary Coronation sword of The Kings of Poland. Made in the 12th Century and used to 1764, the sword installed all Polish Kings and Queens. It is considered Poland's only Crown Jewel. In addition, the blade has Christian and Pagan symbolism etched onto it. The incantations are said to be a link to the power of a King or Queen. A slight chip in the blade is said to have come from King Boleslaus The Brave - who struck Szczerbiec against The Golden Gate of Kiev (when his armies came to capture the City in 1018). Unfortunately, this was several hundred years BEFORE the sword was made! It has been lost and recovered many times in Polish history, due to wars and invasions. Lost again in World War II, it was finally recovered and returned in 1959. 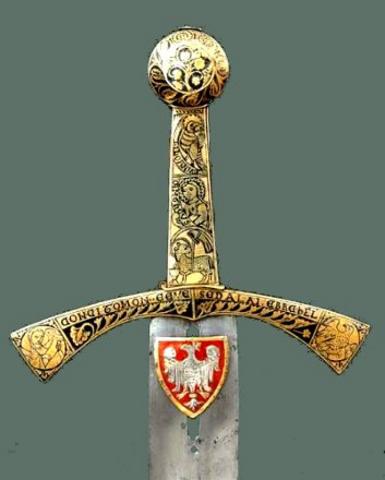