This blade was Poland's attempt at a first true cavalry saber. Up to this point, Polish sabers had NO sharpened blade and only a point (to be used as a thrusting weapon). Developed around the 16th Century, The Polish Army's experience with The Turks (and their cavalry swords), had shown the need for something similar. Initially featuring a distinctive "Turkish" handle, The Szabla was 35 to 48-inches long (with a slight curve). Now single-edged, it weighed anywhere from 2.5 to 3.5 pounds (both light and heavy versions). This blade also became a symbol for Polish Royalty for a period. This particular type of blade would remain in Poland's inventory until the 19th Century. 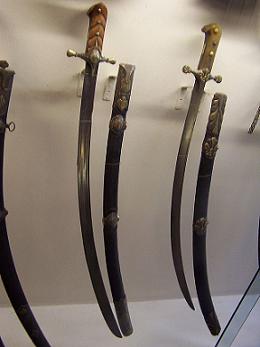